Before giving Anime a chance I used to think it was impossible to find an attractive Anime guy . While I still think most Anime guys are rather plain, there are some exceptions that are total babes! There's also Mehr varieties of styles than I thought. I'll apologize in advance for my weird Kommentare haha.

Guts is without a doubt one of the most masculine (and bad ass) characters I've ever seen. He's really tall, has a great jawline,huge thighs, and a hot voice to go with all that manliness. Not to mention that I Liebe me some thick guys with impressive shoulder...
continue reading...
Who's the Better Kira (Death Note and Jojo's Bizarre Adventure Part 4)
posted by Windwakerguy430

Kira. In the Anime community, that word is most associated with killers, and are shown to be so with that name alone. However, only two of the most deadly antagonists in Anime have taken this name (As far as I know). Those two are Light Yagami AKA Kira from the thriller Anime Death Note, and Yoshikage Kira from the recently released action anime, Jojo’s Bizarre Adventure: Diamond is Unbreakable. However, which of these Kira’s is the better Kira? Which one could defeat the other. Well, before we discuss that, let’s talk about the two for a moment, and see their abilities. Also, this list...
continue reading...
2
Romance Anime Masterlist
posted by dontmindmeyo

If a romance anime/anime containing romance that Du know of is not listed, do not hesitate to Kommentar the name!
Please, do check if the Anime is on the Liste already, though!

The laws of Anime is a growing Liste of physical, universal, and natural phenomenon that seem to appear in various forms in all sorts of anime. The original intent was an effort to classify these incidents into a Liste of "laws" that explained how Anime physics are different from our own (real?) world. It is our hope that Du find them useful to studying Anime, oder at the very least, worth good chuckle.

#1 - Law of Metaphysical Irregularity- The normal laws of physics do not apply.

#2 - Law of Differential Gravitation- Whenever someone oder something jumps, is
thrown, oder otherwise...
continue reading...
2
For now, Your Hand is all I Need (Mikasa/Eren Attack on Titan Fanfic!)
posted by animegurl235
*SPOILER ALERT! If Du haven't finished Attack on Titan yet, it'd be wise not to read this. There is no real MAJOR spoiler, but i'm just saying, just in case...*

Hi Guys! It's animegurl235 (My fanfiction account: link) and i'm Schreiben another AOT fanfiction ( well actually its just a one-shot) after like forever!

I'm sorry it took so long, i was just in a phase where i didn't feel like watching Anime and instead all i did was draw it. lol. i have an IG account if u want to check out my artwork (animegurl 235) btw ^^.

But anyways I just finished attack on titan yesterday and was in complete shock...
continue reading...
High School of the Dead review
posted by johnnygondo 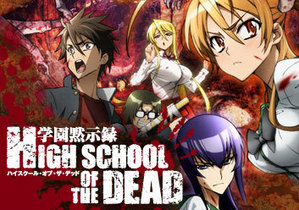 When it comes to anime, especially those involving the undead, there's not really a whole lot that involve zombies. Sure, there's Corpse Princess, but the "zombies" in that Zeigen are Mehr like demons... which makes High School of the Dead truly one of a kind in the horror Anime department.

What do Du get when Du take a George A. Romero zombie movie like Night of the Living Dead oder Dawn of the Dead, combine it with an ecchi/harem Anime such as Liebe Hina, and throw in a few elements from Splatterhouse and Dead Rising? Du get High School of the Dead, a 12-episode Anime series based on the manga...
continue reading...
7
the nameless monster
posted by tigerwolf

this is the cover of the book
this is from my Favorit MONSTER. it's a story about a monster with out a name the story name is the nameless monster.Franz Bonaparta is a characters from monster he wrote the story.that ends up affect Johan and Anna's Liebert life and others. this story is suppose to hypnotize kids and turn them into perfect killers. i hope Du enjoy it!


A long, long time Vor in a land far away, There was a monster without a name. The monster wanted a name so badly. So the monster left to go on a journey to find a name. But the world was so large that he teilt, split into two to make his journey. One went to the west...
continue reading...
6
Anime Dubs and Subs
posted by BatCountry9000

Funimation is one of the more well known dubbing companies.
I'm sorry... but I have to get this off of my chest.

Anyone who is familiar with me will know that, when it comes to Anime shows, I always watch the english dub. I only watch Anime with subs if the Anime hasn't been dubbed yet (which is usually the case for most of the Anime I watch) oder has been dubbed Von a company I don't trust (I'm looking at you, Ocean Productions).

However, it seems that according to the Fans of anime, watching english dubs is a sin against god. They think that the english language is terrible and would prefer the japanese language. Honestly, this makes me sick. It makes...
continue reading...
31
Anime Dictionary
posted by wakana
Anime: Japanese for "animation" oder "cartoons." In American fandom however, it's used to refer to any form of Animation produced in Japan. Anime comes in the form of animated TV shows oder movies, video games, and comic books.

AMV: stands for Anime Musik Video. AMVs are Videos made Von Fans that feature scenes from Anime together with audio from another Quelle such as English songs, dialogue oder Musik from another TV show, oder movie trailers. The best AMVs are praised for their good video editing techniques and cleverness in choosing the best Anime scenes to go with the chosen song oder dialogue. 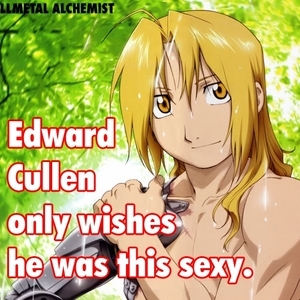 Title: Edward vs. Edward
Author: Dearheart
Rating: Rated G for Giggles! :D
Summary: Once upon a blank piece of paper, two very different characters from two very different fandoms happened to bump into each other. One was an alchemist with height issues. The other was a vampire with no fangs. Chaos and comical verbal attacks ensued.

This goes out to all of Du who are Team Edward...ELRIC!! Because when HE glistens in the sun, IT'S BADASS. No offense to the Twilighters, but our awesome, butt-kicking, short-ranting Ed was around long before Mr. Sparklepants was even a speck of glitter in Stephanie...
continue reading...
More Cards
1234567891011