Shiva, like some other Hindu deities, is sagte to have several incarnations, known as Avatars. Although Puranic scriptures contain occasional references to "ansh" avatars of Shiva, the idea is not universally accepted in Saivism.[171] The Linga Purana speaks of twenty-eight forms of Shiva which are sometimes seen as avatars.[172] In the Shiva Purana there is a distinctly Saivite version of a traditional Avatar myth:

Virabhadra who was born when Shiva grabbed a lock of his matted hair and dashed it to the ground. Virabhadra then destroyed Daksha's yajna (fire sacrifice) and severed his head as...
continue reading...
History of Goddess Durga
posted by medouri

The word Shakti means divine energy/force/power, and Durga is the warrior aspect of the Divine Mother/Brahman (Supreme Absolute Godhead).

In Jain Texts, she is referred to as Durga oder Kushmaandi devi and is the yakshini of 22nd tirthankar of Lord Neminath oder Arishtanemi.

Nanda was the head of a community of cow-herders, and he settled in Vrindavana. The stories of Krishna's childhood and youth tell how he became a cow herder,[52] his mischievous pranks as Makhan Chor (butter thief), his foiling of attempts to take his life, and his role as a protector of the people of Brindavana.

Meaning: Oh, Lord Shiva, who is seated on Mount Kailas, whose forhead is decorated with the moon and the king of serpents as a crown, who is the Ocean of Mercy and the remover of delusion, Du alone can protect me. I surrender to thee.

Griechische Mythologie
2
When was Lord Shiva born?
posted by medouri

Lord Shiva can be viewed in two senses. I dont know which one Du are referring, so Im gonna tell both.
First of all, Hinduism teaches monotheism, the absolute Nirakara Rupa Parabrahma being classified into different forms oder avatars like waves in the ocean. Lord Shiva is one of it. Therefore, he can supposed to be a personification of a form of energy required for act of destruction, scientifically speaking. Lord Shiva is then part of the absolute, Du cannot tell which yuga he lived because he is always living. It's like asking in which Jahr did kinetic energy exist?.
If Du are asking in the...
continue reading...
1
Lord Shiva's relationship to Vishna
posted by medouri
During the Vedic period, both Vishnu and Shiva (as identified with Rudra) played relatively minor roles, but Von the time of the Brahmanas (c. 1000-700 BC), both were gaining ascendance.[193] Von the Puranic period, both deities had major sects that competed with one another for devotees.[194] Many stories developed Wird angezeigt different types of relationships between these two important deities.

Sectarian groups each presented their own preferred deity as supreme. Vishnu in his myths "becomes" Shiva.[195] The Vishnu Purana (4th c. AD) shows Vishnu awakening and becoming both Brahmā to create the...
continue reading...
Goddess Durga
posted by medouri

For the Goddess-worshipping Shaktas, Durga is sometimes equated with Mahadevi, the Supreme Goddess. Her triumph as Mahishasura Mardini, Slayer of the buffalo Demon is a central episode of the scripture Devi Mahatmya. Her victory is celebrated annually in the festivals of Navaratri and Durga Puja.
Lord Ganesh
posted by medouri 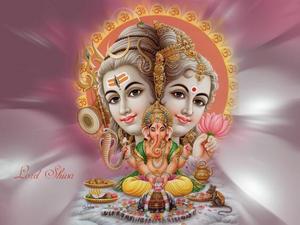 Ganesha (Sanskrit: गणेश; IAST: Gaṇeśa; About this sound listen (help·info)), also spelled Ganesa and Ganesh, also known as Ganapati (Sanskrit: गणपति, IAST: gaṇapati), Vinayaka (Sanskrit: विनायक; IAST: Vināyaka), Vighnavinashaka, Gajanana and Pillaiyar (Tamil: பிள்ளையார்), is one of the best-known and most widely worshipped deities in the Hindu pantheon.[5] His image is found throughout India and Nepal.[6] Hindu sects worship him regardless of affiliations.[7] Devotion to Ganesha is widely diffused and extends to Jains, Buddhists, and...
continue reading...
Goddess Kali
posted by medouri

Kālī (Sanskrit: काली, IPA: [kɑːliː]), also known as Kālikā (Sanskrit: कालिका), is the Hindu goddess associated with empowerment, shakti. The name Kali comes from kāla, which means black, time, death, lord of death, Shiva. Since Shiva is called Kāla—the eternal time—Kālī, his consort, also means "Time" oder "Death" (as in time has come). Hence, Kāli is the Goddess of Time and Change. Although sometimes presented as dark and violent, her earliest incarnation as a figure of annihilator of evil forces still has some influence. Various Shakta Hindu cosmologies,...
continue reading...
Murugan and Valli -1
posted by medouri
The story of Murugan's courtship and his union with the daughter of the hunters, Valli, is the most important of all Tamil myths of the Sekunde marriage of a god. In the Sanskrit tradition, Skanda is either an eternal brahmacārin (bachelor) oder the husband of a rather colourless deity, Devasena, the Army of the Gods. In Tamil, in contrast, the earliest reference to a bride of Murugan is to Valli and there can be no doubt whatsoever that Valli is the Mehr beliebt and Mehr important of Murugan's two brides. Hence, I do regard the lovely myth of Murugan and Valli as an indigenous-autochthonous...
continue reading...
1
Lord Rama
posted by medouri
Characteristics :     Morality, Virtue, Ideal son, Ideal king
Other Names :     Shri Ram, Ramachandra, Maryada Purushottama
Principal Scripture :     Ramayana
Consort :     Sita ji
Mula Mantra :     Om Sri Ramaya Namah
Rama Gayatri Mantra :     Aum Dasarathaye Vidmahe
Sitavallabhaya Dheemahi
Tanno Ramah Prachodayat


Lord Rama
Lord Rama is known as the seventh incarnation of Lord Vishnu. Rama, the perfect Avatar of the Supreme Protector Vishnu, has always been beliebt among the Hindu...
continue reading...
1
Kartikeya oder Murugan
posted by medouri

Hindu god Karthik oder Kartikeya, son of Lord Shiva— also called Skanda and Subrahmanya; called Murugan in Tamil)— is a beliebt Hindu deity among Tamil Hindus, and is worshiped primarily in areas with Tamil influences, especially South India, Sri Lanka, Mauritius, Malaysia, Singapore and Reunion Island. His six most important shrines in India are the Arupadaiveedu temples, located in Tamil Nadu. In Sri Lanka, Hindus as well as Buddhists revere the sacred historical Nallur Kandaswamy temple in Jaffna and the sacred Buddhist and Hindu shrine of Katirkāmam Temple (also in Sinhala "Katharagama...
continue reading...
Parvati And The Wish-Fulfilling baum
posted by medouri
Lord Shiva and his consort, Parvati, used to live on Mount Kailash. They meditated there and also they used to bless their devotees. They led a very happy and fruitful life.

One Tag Parvati made a special request to her consort, Shiva, to take her to a grove named Nandankanan.

“Definitely I will take Du there,” promised Shiva. So they went together to that particular grove. All the trees in that grove were so beautiful. Parvati was extremely moved Von their beauty. She asked her Lord, “Please tell me if there is any baum that is Mehr special than the rest. When I look at them, they all...
continue reading...
Lord Shiva
posted by medouri

Shiva (pron.: /ˈʃɪvə/; Sanskrit: शिव Śiva, meaning "auspicious one") is a Hindu deity and is "the Destroyer" oder "the Transformer"[2] among the Trimurti, the Hindu Trinity of the primary aspects of the divine. He is considered the Supreme God within Shaivism, one of the three most influential denominations in Hinduism,[3][4] where as in other branches of Hinduism such as in the Smarta tradition, he is regarded as one of the five primary forms of God.[3]

Shiva is usually worshipped in the aniconic form of lingam. He is described as an omniscient yogi, who lives an ascetic life on Mount Kailash,[2] as well as a householder with a wife Parvati, and two sons, Ganesha and Kartikeya. Shiva has many benevolent as well as fearsome forms. He is often depicted as immersed in deep meditation, with his wife and children oder as the Cosmic Dancer. In fierce aspects, he is often depicted slaying demons.
More Cards
1234567891011