2
Memory part 12
posted by Robin_Love
He stumbled, falling to the ground. Dark energy pulsed all around. He pushed himself back up, ignoring the pain flowing through him. He'd been gone less than a Tag and already was having issues. He fell again, this time staying down.
“Would Du like some company?”
He rolled onto his back.
“Yeah.”
His scythe flashed white and then transformed. Her long blonde hair fell down past her knees, her cat like ears placed on the side of her head. She looked at him with her large red eyes. She was dressed all in black, the red accents drawing your eyes everywhere. She smiled at him.
“Hello master.”
“Hey Freya.”
“We've been traveling. Where are we?”
“Soria.”
“For the shield?”
“Yeah.”
“Then why have we stopped?”
“I need a rest.”
She nodded and came close to him. He smiled at her.
“Is there anything I can do for you, Master?”
“Not unless Du can make the pain go away.”
“Where does it hurt?”
“All over. Mostly my back and wings.”
“Would Du roll over?”
He groaned and she let out a laugh.
“How am I to help Du if Du won't let me?”
“Fine.”
He rolled over and she placed her hands on his back gently.
“May I remove your jacket?”
He groaned again but let her. She told him to open his wings and he did.
“Thank Du Master.”
“Whatever.”
She smiled and her hands worked on his back and his wings. Dylan closed his eyes, relaxing.
“Why do Du work so hard, Master? Aren't there others who can fix the shield?”
“No, Freya. All are too scared.”
“What about you?”
“I'm not scared. I'm petrified. If the Shadows get out, Earth will not survive.”
Freya leaned down and kissed his cheek.
“My Master is the bravest Shadow member there is!”
“Not the bravest, Freya.”
“Yes he is!”
Dylan shook his head.
“Whatever Du say Freya.”
“Whatever I say?”
“...sure.”
He rolled over to look at her. She was looking at him and the hands that had been on his back now rested on his chest.
“Master...never replace me.”
Dylan blinked. He knew Freya inside and out. She was his weapon, his friend and he was her master. But he had never thought she would say that. Most weapons would have asked for their freedom. But Freya had obviously not chosen that.
“You don't want to be free, Freya?”
She shook her head, her blonde hair whipping around.
“No. I want to stay with Master Dylan. I want to protect Master Dylan. I never want Master Dylan to be hurt. I Liebe Master.”
She came close, resting her head on his. She looked into his eyes.
“Does Master Liebe Freya?”
Dylan looked at her, eyes wide. He knew for a weapon to Liebe it's Master meant undying loyalty to death. Not the kind of Liebe he felt for Phoebe. And it was rare for a weapon to say that.
“Freya, I do Liebe you. And I'm not going to replace you.”
She smiled and wrapped her arms around his neck.
“Freya feels happy. Does Freya have a family?”
“Freya, you'll always have a family with me.” 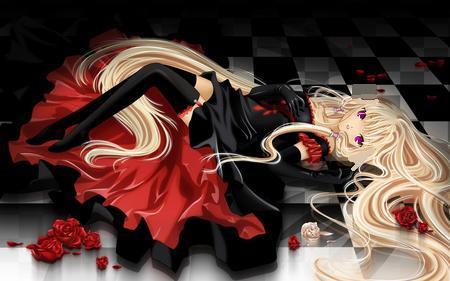 Becca the Demon's Child
added by Robin_Love
11
Character makers online!
posted by AislingYJ
Updated 6/3/14
I'm bored, so I thought I'd share with Du a few websites online that Du can Design your characters! There are tons of websites out there, these are just a few.
link
This website is Von far the best superhero generator I've found. Basically Du use it to make your character in costume. They have endless options of costume parts for both male and female characters, and they even allow Du to Bewegen parts around, resize them, and color them. Du can save the character to the game, and then load it later, but if Du want to save an image to the computer, Du have to take a screenshot....
continue reading...

Back of the Normal, Stealth and water dress
added by EclipseYJ
Source: Alice madness returns

Personality: he is very outgoing when he wants to be and very caring for others, hes Mehr open...
continue reading...