Jade West
Jadelyn August West (Born June 17 1994) is Beck's popular, beautiful girlfriend, but is often snarky and antagonistic. Jade seems to have a dark personality, and often wears black to display this. She is extremely possessive of Beck and often shows her jealous side when she sees Beck with another girl. She and Tori start out as rivals, but the rivalry cools down over time. In the episode "Stage Fighting," Jade fakes an injury so that Tori gets punished, and though Tori found out about this she did not say anything. From that point on, Tori and Jade become Mehr friendly towards each other, and Jade has come to Tori for help, most notably in the episodes "Jade Dumps Beck" and "Freak the Freak Out."

Jade usually tones down her snarky behavior towards Cat. She, like Cat, is gifted in acting, Singen and dancing. Jade also carries around a black bag with the Gears of War logo on it. She is 16 years old. Jade has an odd affinity for pairs of scissors; her locker at Hollywood Arts is decorated with numerous pairs of scissors, and she often cuts up seemingly Zufällig objects like Blumen and plastic trash cans.
Sueli9000 and 20lvhartleroad like this
20lvhartleroad hey jade west i'm lauren hartleroad i'm your biggest fan 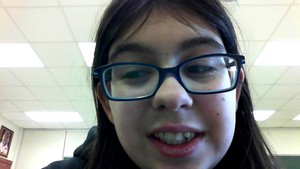