2
I'm Not the Vampie CH3
posted by vamp_grl_123
What’s going on? I can hear everything going on. Like I’m awake, but I can’t move. I can’t even open my eyes. I know I fainted in Trent’s arms, but what happens now? I can feel him picking me up and now he’s taking me some where. Please be the school infirmary. But I felt the outside wind, and the sun hitting my face. Somebody help. I am being kidnapped Von a vampire.

He put me down in the passenger sitz and put glasses on me. Then after I was buckled down he got into his sitz and drove off. Where is he taking me? After what seemed like an Stunde we finally came to a complete stop. He unbuckled his sitz bet, then he undid mine. Then he took my glasses off and he stopped.


“Maybe Du aren’t human.” He sagte but quickly answered, “No Du must be a human. I can feel the heat you’re giving off. I can hear your heat beating. I can smell your blood.” He seemed to freeze there. “It smells incredible. To die for,” he sagte bringing his lips to my neck.

“Such a waste. Vampire blood only tastes good to mates. I guess I’ll never know how sweet you’ll taste.” He sighed. “Maybe one drink, before I spend eternity wondering.” He sagte coming close to my neck. I can feel his hot breath on my skin. I wanted to push him off, but I couldn’t even open my eyes.

He slid his finger down my right check scratching it. Then he slid his tongue up the thin scarlet line cleaning in up. “You taste better than I imagined.” He sagte cutting me the same way again. He did this 3 Mehr times before he brought his motte, nachtfalter to my neck.

His fangs touched my skin and I wanted to scream. I wanted to kill him on the spot. He gently began to pres down when a knock on the car window stopped him.

“What do Du think your doing?” the voice yelled. “You can’t bite her. She’s the future queen.” He yelled. Trent backed off.

“She smells so sweet. I had to taste her.” He sagte cutting my cheek again but a much smaller cut.

“Stop it, before Du get in trouble. Du want Nyx to remover her favor in you?” the voice asked opening the door now.

“Will it mean I get her as my bride.” He asked licking the blood again.

“Let’s go. She’ll be awake soon, and we need her asleep for preparation of the ceremony.” He sagte pulling me away form him.

They carried me somewhere. I’d Liebe to be able to open my eyes again. “All hail the future queen.” The new voice from the car yelled. The room was cold and yet warm. I can smell candles being burned along with incense. I didn’t like it so I turned my head and buried it into who ever was holding me.

“Nyx picked her?” a snobby girl’s voice asked. “I am better than her Von a long shot.” She sagte aggravated.

“Is she even a vampire?” another voice asked. This voice sounded raspy and like Napoleon Dynamite.

“Ask Trent, he’s been snacking on her.” The voice from the car said.

“What? Du did. Do Du know what could happen?” a different voice asked. How many people are here anyway?

“She might just be a vampire.” Trent sagte holding me closer to him.

“Where’s her pendent?” a different voice asked. I was laid on a couch now.

“I haven’t seen it. Let me see.” Trent sagte wrapping his hands around my neck. Then he passed from my neck, down my neck and in-between my chest to my navel. When I wake up I am going to kill him.

“Huh, no pendent.” He sagte backing away.

“Well get her ready for the ceremony.” Another voice said. Then I was picked up, and taken away yet again.

I was laid down again but this time on a bed. I opened my eyes. About time. I looked at Trent who walked toward me with a box in his hands. “Oh you’re awake. Good then Du can dress yourself.” He sagte putting the box down.

“Why? Du had no problem putting your hands all over me before.” I sagte as I kicked him hard, but I missed his pride and just hit his legs.

“Ok, you’ve hit me twice already. Once Mehr and you’ll be sorry. Second, I was checking for a pendent. I am not a pervert.” He said.

“One, yes Du are. 2, what pendent?” I asked. He opened his hemd, shirt a little and took out a long sliver necklace. At the end was a kreuz with a red ruby in it.

“This is my pendent. All Vampire wear one so we don’t lose control.” He said. “You don’t have one….or Du do and I missed it.” He sagte gliding his finger down my neck again. I punched him off.

“How about the car? Du drank my blood.” I yelled.

“Sorry. Du smelled too good to pass off.” He sagte coming closer to me again. “How about now I asked Du first.” He sagte bringing his finger close to my cheek.

“No, leave me alone. Take me home. No, let me call my mom. I don’t want to be near you.” I said. Running to the other side of the dark room.

“Here get dressed.” He sagte throwing the box to me. Inside was a blood red 15th century gown. It was beautiful, and had a black corset and lace.

“Why do I need to get dressed?” I asked.

“Because Du were chosen to be the new Queen of our coven. So we’ll crown Du today. So get ready.” He sagte getting up to leave.

“I don’t know. I am just the message boy. I deliver Nyx’s requests. Her request was for Du to be our queen. So get ready.” He sagte opening the door.

“What if I don’t want to be queen?” I asked annoyed.

“You don’t have a choice.” He sais turning back to me.

“Yes I do. This is all fake. Du are really pathetic. Du expect me to believe you?” I yelled.

“Um I drank your blood didn’t I?” he asked annoyed.

“Any psycho can drink blood. It’s called cannibalism.” I sagte in a ‘matter of fact’ tone.

“Why Du Queen I have no idea. Aren’t the queens supposed to be kind and gentle. Your rude and stubborn.” He said. I slapped him a couple of times.

“Hey watch my pendent.” He yelled blocking my blows.

“Shut up. It’s fake Du creep.” I sagte ripping it off his neck. His eyes went from smaragd green to blood red. His fangs came down so low they reached his chin. His hair became longer and messier. His nails, longer and sharper. He looked at me menacingly. 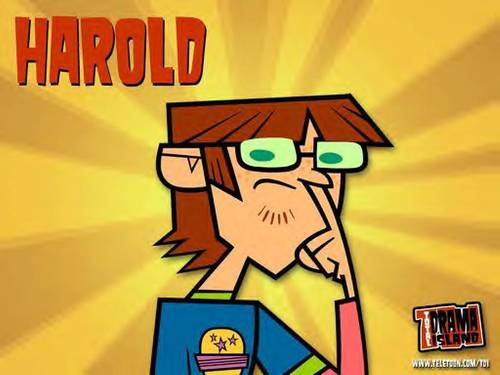 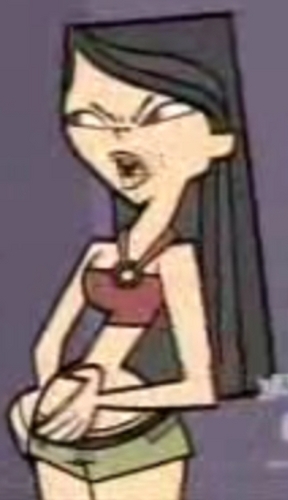 2
Heather got fat!
added by lydiascats 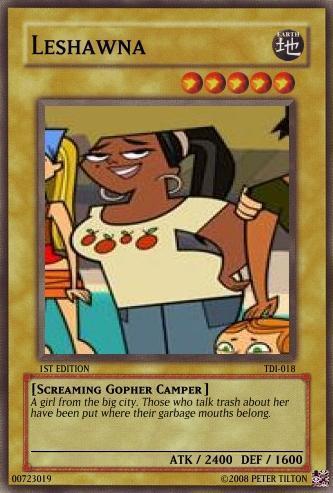 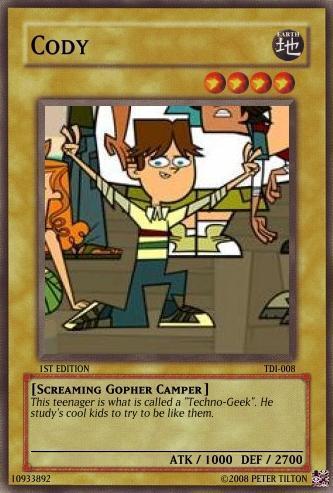 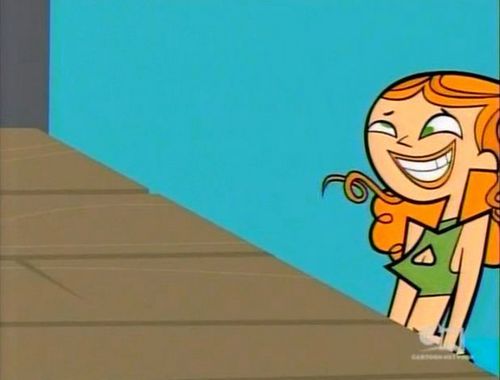 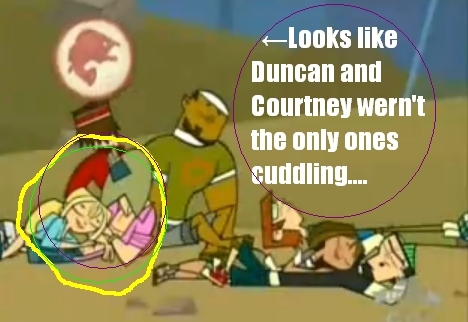 2
OMFG! look who was cuddling and no one noticed!
added by Duncan_Courtney 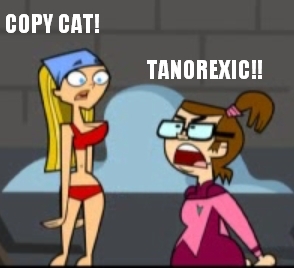 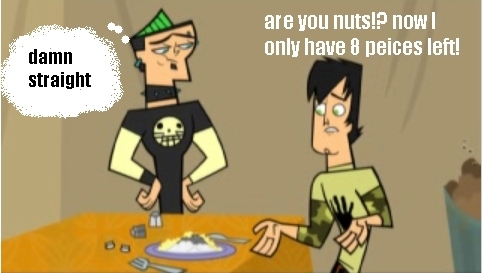 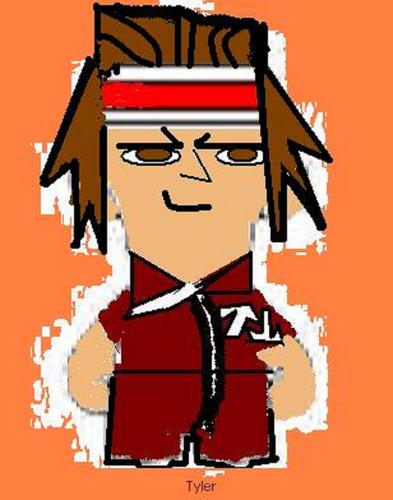 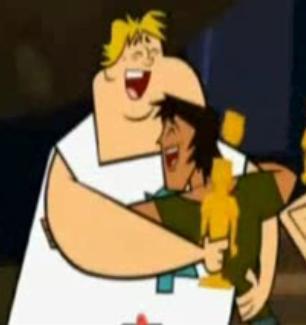 owen and justin
added by codythemaster 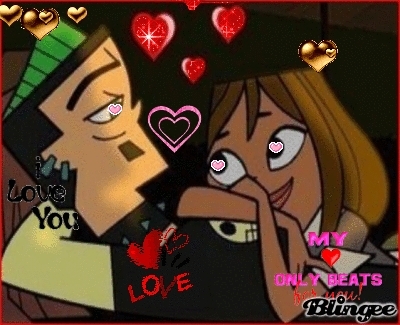 2
My DXC blingee
added by Duncan-superfan 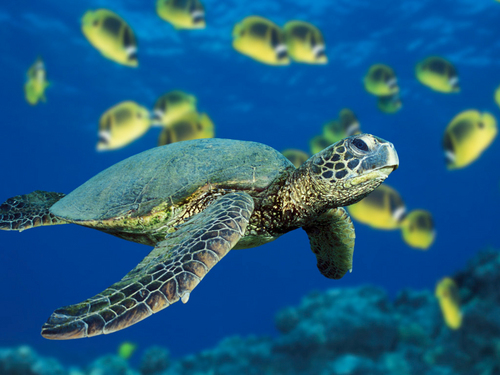