Fanpop's Dr. Evan reviewed the collector's edition prior to release:

"Part of Disney's unstoppable 2016 movie domination, The Jungle Book paired astounding visuals with a multiple-Oscar-winning ensemble cast that is beyond reproach.  The Collector's Edition release is another example of top-tier bonus content paired with a flawless transfer to home 3D.

Of course, it's also the top edition for people without 3D TVs, and given Disney's movie vault (good luck getting a real copy of Beauty and the Beast 3D now), it's a classic worth obtaining.

Unlike the Star Wars Collector's Edition I reviewed recently, the Collector's Edition of The Jungle Book ships in a more typical blue case and without the leatherette display box.  I actually prefer this presentation as it fits in better with a typical movie collection, but to each their own.

Finally, it's difficult to describe the richness of the 3D, and of course not possible to show in photographs.  Compared to the aforementioned Beauty and the Beast 3D, which was turned 3D after the fact, The Jungle Book's visuals were intended for HD and 3D from the start and, in many ways, are more vivid than those of real life.  Compare a photograph of a Bengal or Siberian tiger versus Disney's rendering of Shere Khan and you'll see what I mean.  Highly recommended." 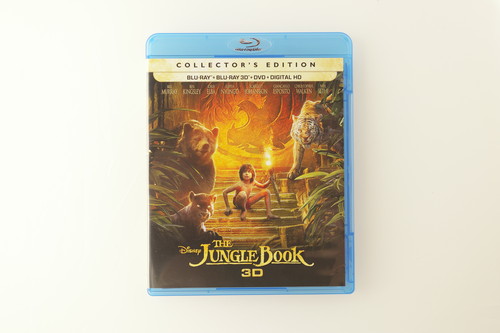 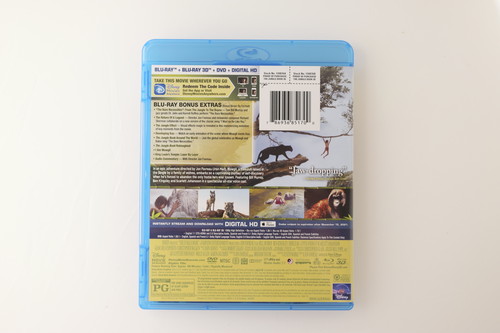 “It’s one of the few films in which 3D enhancement is justified.  Each scene captures the essence of each animal so vividly that children in the audience were reaching out to the screen to try to ‘touch’ the fur.  –Maricar Estrella, Fort Worth Star-Telegram

Get lost in the jungle with collectible packaging, spectacular 3D and new bonus features!

The Collector’s Edition provides fans with unprecedented access to “The Jungle Book” production through exciting new bonus features, including a performance of “The Bare Necessities” by Bill Murray (voice of Baloo) and jazz greats Dr. John and Kermit Ruffins, an inside look at the collaboration between director Jon Favreau and renowned composer Richard Sherman on a new version of the classic song “I Wan’na Be Like You,” a fascinating feature exposing the visual effects magic behind some of the movie’s most memorable moments, an early animatic of the scene where Mowgli meets Kaa, and a global celebration as Mowgli and Baloo sing “The Bare Necessities.”

“The Jungle Book” has mesmerized audiences worldwide, earning critical acclaim and more than $965 million at the global box office to date. It boasts an unforgettable all-star cast, including Bill Murray (“Lost in Translation”) as the voice of Baloo, Ben Kingsley (“Learning to Drive,” “The Walk”) as Bagheera, Idris Elba (“Beast of No Nation”) roars as the voice of Shere Khan and Lupita Nyong’o (“12 Years a Slave,” “Star Wars: The Force Awakens”) as the voice of mother wolf Raksha. Scarlett Johansson (“Avengers: Age of Ultron”) gives life to Kaa, Giancarlo Esposito (“Breaking Bad”) provides the voice of alpha-male wolf Akela  and Christopher Walken (“The Deer Hunter”) lends his iconic voice to King Louie. Newcomer Neel Sethi stars as the film’s only human character, Mowgli.

* Bonus features may vary by retailer. New bonus content is available in the 3D Collector’s Edition package only.

Directed by Jon Favreau (“Iron Man,” “Iron Man 2,” “Chef”) and produced by Favreau and Brigham Taylor (executive producer of “Pirates of the Caribbean: Dead Men Tell No Tales,” “Tomorrowland”), from a screenplay by Justin Marks, “The Jungle Book” is a live-action epic adventure based on Rudyard Kipling’s timeless stories, inspired by Disney’s classic 1967 animated film and centered on Mowgli (Neel Sethi), a man-cub who’s been raised by a family of wolves. But Mowgli finds he is no longer welcome in the jungle when fearsome tiger Shere Khan (voice of Idris Elba), who bears the scars of Man, promises to eliminate what he sees as a threat.

The film’s musical score, composed by Emmy® winner and Oscar-, BAFTA- and Annie Award-nominee John Debney (“Elf,” “Iron Man 2”), features a classic orchestral sound accented by ethnic instruments and pays homage to the original film by highlighting snippets of the classic songs we all know and love.

ABOUT THE WALT DISNEY STUDIOS:

For over 90 years, The Walt Disney Studios has been the foundation on which The Walt Disney Company was built. Today, the Studio brings quality movies, music and stage plays to consumers throughout the world. Feature films are released under the following banners: Disney, including Walt Disney Animation Studios and Pixar Animation Studios; Disneynature; Marvel Studios; Lucasfilm; and Touchstone Pictures. The Disney Music Group encompasses the Walt Disney Records and Hollywood Records labels, as well as Disney Music Publishing. The Disney Theatrical Group produces and licenses live events, including Disney on Broadway, Disney On Ice and Disney Live!.