5
AOT Female Characters Strenght Ranking
posted by DaniMF
Hello, I'm new in this club but not in Fanpop. I've just finished watching the first season and I was thinking about which character would be the strongest and which one would be the weakest.

Credit to IllusionDolls, who helped me with the article. 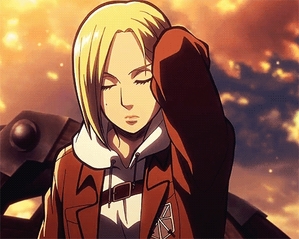 Any time I enter a fandom and pick a Favorit character that I really love, I feel obligated to make one of these, 'why I like' articles. So here's why I like Annie so much.

One of the main reasons I got into Annie's character is because I simply find her to be an intriguing character. For the most part she was very quiet and stoic but definitely has something Mehr going on beneath the surface. insgesamt I like her personality. There are characters who like to play the hero and there are characters who have Mehr selfish desires, but feel bad for doing so (like Jean). And then there's Annie who...
continue reading...
-1
To Pick A Body Apart (Annie/Hanji Fanfic)
posted by zanhar1
To pick a body apart takes special precision. Du have to dig deep, deep into the flesh, through the muscles, until Du hit bone. In some cases Du have to dig your way through a crystal first. After months of picking and prying Zoe has managed to strike gold, which in that case, is the venerable form slumbering deep within the crystal. And a treasure she is; a female titan, finally ready for subjection to Zoe’s curiosity. She hoisted Annie out of the crystal’s husk with rough hands. She regarded her with the same inquisitiveness as she did Eren. But this time the Titan is all hers. What...
continue reading...
3
Who's the best Titan shifter for Titan vs. Titan combat Spoilers: Up to chapter 45 of the Manga
posted by Spikegilfer1997
So this topic is floating around community, thought I'd give my ramble opinion on it.

Colossal I'd say is the weakest.

Eren is kind of a one trick pony. "Rawr" *Charges*
Reiner was shown using similar straight vorwärts-, nach vorn tactics, I believe Eren remarks upon him using nothing but offense, could be wrong, been a while.

The agility the dancing gets from her size is significant. My only issue is if she could get through the armor of Reiner.
And Annie, I think she has the best insgesamt stats with a well rounded fighting style, in the Anime Eren gets the better of her because he came out of nowhere with a...
continue reading...
attack on titan role play/fanfiction
posted by digimon_lover_

Dear readers,
This is an rp/roleplay /fanfiction for attack on titan
The regular characters will be there and just so Du can enjoy it even Mehr Du can make an oc character and I'll put it in the fanfic.I even made one for the fanfic myself.

Attack on Titan Fanfiction- Promise Me
posted by animegurl235
NOTE: The reason the whole story refers to me is 'MimiBlue' instead of 'animegurl235' is because i copied and pasted this straight from my fanfiction account

and I was to lazy to Bearbeiten anything :P. So yeah! ENjoy!

Hi guys! This is MimiBlue and it's my first fanfiction! YAY! I really want to be a writer when I grow up so I just wrote this small story based off of Episode 5 of Attack on Titan I Liebe Liebe Liebe the pairing of Eren and Mikasa so I just HAD to write this! :D SO without further ado…. 'Promise Me'. (Told from Mikasa's POV) And the Titel SUCKS I know
P.S: plz R&R