Who’s Behind This TWITPIC?
posted by logan789 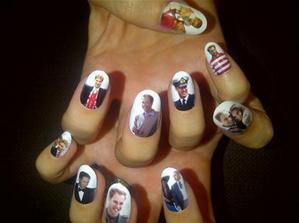 The Royal Wedding between Prince William and Kate Middleton marked history in a lot of people’s lives today, not only for British citizens but everyone around the world! Many people stayed up late to watch the wedding even if it meant no sleep until 4 am! Others showed their support Von wearing clothing with the British flag on it oder holding signs that read “Congrats Prince William and Kate!”

One of our Favorit Berühmtheiten took her support to another level, though. She’s always known for her crazy outfits and accessories, but this time around it was her nails that got the royal treatment!
More Cards
1234567891011