The Comeback of all Comebacks.
posted by petkv
Having been a Petra Kvitova Fan for many years, it was strange to say the least that just after my daughter Bethany purchased me a signed photograph from Amazon, this wonderful and remarkable lady was attacked in her own Home Von an intruder posing as a so called professional.
But Petra being as Merida - Legende der Highlands as ever proved her doctors wrong and has made giant strides in her quest to win another Tennis grand slam.
However we should all let her know that her courage and tenacity has helped thousands if not millions of people worldwide.
Let me explain, Petra is an example to us all of how to beat the odds and make a full recovery to health and fitness. Du may say that she has not won another grand slam tournament yet, but please be patient, for that blessed Tag will come in the not too distant future.
So for now enjoy Petra's sheer presence of mind, her Tennis skills and her Liebe for others.
1
Kvitova has after career - he wants her Radek Stepanek !
posted by blackcats 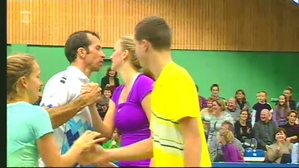 Published: 17th Sekunde 2012 Updated: 17th Sekunde 2012
Which Tennis player Radek goes hands on the court ends - remember to Martina Hingis and Nicole Vaidisova. Now famous wrasse announced that the Olympic Games in London goes to Petra Kvitova. It's another notch?
We do not in any way say that would not leave womanizer Stepanek had lured achievements Czech sports stars of last Jahr and made ​​his defense over poor timid junior Pavlásek (which could well be Radek's son) way into her bed. So far only about sports cooperation. But on the line is never far from thought to action.