I have three Fragen related to MJ

1.what does the 3 sign at the beginning of The way Du make me feel Musik video mean ?
2. In some of his pictures in the late 20th his nails were very dark , is that because of a disease he had oder what ?
3.In smooth criminal song , the heartbeat intro was Michael's herz beat , i read that on one of the websites , is that true ?? 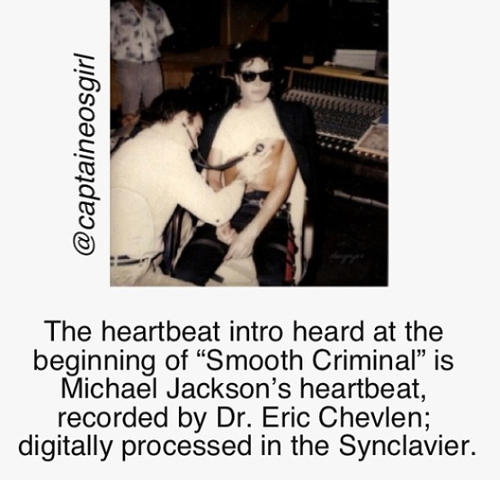 Thanks for your answer , but i don't understand how his dark nails were related to vitiligo ?? i know that the vitiligo makes the skin lighter and even under his nails it has to be the same right ?
M_Annie_J posted Vor mehr als einem Jahr

And thanks for adding that info about Thriller , never knew that before :)
M_Annie_J posted Vor mehr als einem Jahr
Hiding 2 comments... click to show.

@M_Annie - Michael gradually Lost the pigmentation of his skin, at first he got white patches, but because he had the most severe type of vitiligo, it progressed, and at the end of his life, 85% of his body had no pigmentation anymore. He used makeup to camouflage the uneven skin color, but that was of course not possible on his nails, that’s why they appeared discolored for a while.
Vespera posted Vor mehr als einem Jahr