*May 26, 2007: Arrested for first DUI. Reinters rehab at Promises Treatment Center facility for a 45 Tag program. Voluntarily fitted for SCRAM bracelet to monitor her sobriety.

*July 24, 2007: Arrested for Sekunde DUI. Charges include: Felony possession of cocaine, misdemeanor DUI and driving with a suspended license.

*August 2007: Pleads guilty to misdemeanor cocaine use anddriving under the influence and was sentenced to one Tag imprisonment and 10 days' community service....
continue reading...
2
Lindsay Lohan's Criminal Record, Part 2
posted by auntienichole 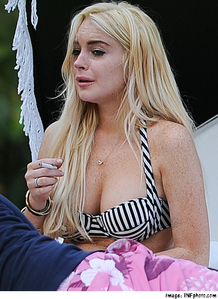 Linds looks good in stripes!
*February 9, 2011: Lohan was charged with the theft of a halskette reported stolen from a jewelry store in January. She was sentenced to 120 days in jail, 360 hours of community service at the Downtown Women's Center, and 120 hours at the L.A. County morgue for misdemeanor theft and probation violation, to which she pled no contest.Due to jail overcrowding, Lohan served the sentence under house arrest, wearing a tracking ankle monitor, for 35 days between May 26 and June 29. While under house arrest, Lohan failed a Zufällig alcohol test. A judge decided it did not constitute a probation violation...
continue reading...
2
Lindsay Lohan “Spirit In The Dark” Album Release datum
posted by mommaof2boys

Spirit in the dark
Lindsay Lohan has announced that her new album will be called “Spirit In The Dark” and it will be released on November 4th.The singer turned actress has also unveiled that the song entitled “Playground” will be the first single for the project.
The track will hit radio stations nationwide in September.

1.Bossy (Produced Von Stargate)
2.Playground (Feat.Pharrell)
3.Spirit In The Dark
4.The Way We Move
5.Washing My Hands (Produced Von Tricky Stewart)
6.Problem Solver (Call Me) (Produced Von Tricky Stewart)
7.Paranoid
8.I Will Find Out Who U are
9.This Time Around
10.Me Myself And...
continue reading...
Lindsay Lohan Will Return to Rehab
posted by Carolyn-
Although she relapsed just weeks after checking out of UCLA inpatient rehab on Aug. 24, Lindsay Lohan is serious about her recovery, a Quelle close to the actress says.

"She will step up her treatment and do Mehr than what she was previously ordered to do," says the source, adding that link in the coming days.

Lindsay Lohan and Samantha Ronson have been at it again. Mere hours after angering management types at the Seminole Hard Rock Hotel & Casino on Saturday night for not talking to media, the passionate duo had another blowout, this time at Las Vegas nightclub Prive.

According to widespread reports, Lohan popped up to surprise her DJ gal pal during her Monday night gig. But around 3 a.m., an angry-looking Ronson was spotted as she stormed out of the club and sped off in her Porsche, sans Lohan.

When are these two going to call it quits already? 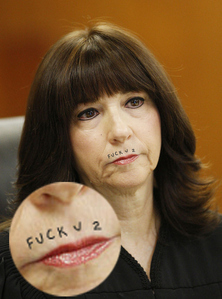 Judge Revel, did not tolerate Lindsay's nonsense!
*March 14, 2012: Lohan is accused of allegedly sideswiping a person with her car outside a Hollywood hotspot and then fleeing the scene. L.A. prosecutors decline to prosecute, citing “no direct evidence.”

*March 29, 2012: The comeback kid finally completes the probation in her DUI case and is placed on informal probation for the halskette theft.

*June 2012: According to MTV, in the midst of trying to revive her career and posting several positive probation reports at the oben, nach oben of the year, she finds herself in Mehr trouble. Although not seriously injured, she is taken to the hospital after crashing...
continue reading...
Lindsay Lohan dropping last name
posted by HaleyDewit
Lindsay Lohan's mother says the U.S. actress is dropping her last name and will be known only as Lindsay, PopEater.com reported.

"Plus, me and [younger daughter] Ali will be officially changing our last names back to my maiden name, Sullivan."

The PopEater.com Berichten did not say if the Lohans have legally filed for the name changes.

Lindsay, who has been battling addictions to drugs and alcohol for years, is awaiting trial for allegedly stealing a $2,500 necklace. She is on probation for a 2007 driving-under-the-influence conviction.

The 24-year-old actress is best known for her work in "Freaky Friday," "The Parent Trap" and "Mean Girls."
2
A Tale Of Two Apples
posted by AuntieNicole
Paris had two apples. She cut them up and sold them at an apfel, apple slice stand, and made enough loot to buy four apples. She kept doing that. Now Paris has one million apples. apfel, apple Computers was so impressed, they gave Paris a one-billion-dollar deal to be their spokesperson. Now Paris is RICHRICHRICH!!

Linds had two apples. She fermented them into jailhouse wine and guzzled it. Now Linds has nothing, so she borrowed Mehr apples from a "good friend for years". She never paid back the apples, so now Linds has debt. She blamed the debt on a black kid. Now the black kid is suing Linds for one billion dollars.