5
December/December - Chapter 26
posted by HuddyBea
I'm lazy so I won't post the previously if Du don't mind...I bet Du remember, and now shall I go swimming? Shall I?! I'll post the Weiter one like on Sunday I hope, but geez guys, when all this anxiouness started?! :P Come on...tension never killed anyone :D
LOL, sorry, I know, I'm evil. Hope Du like it!

It had just ripped out of her mouth.
Just like that.
Just as much as it had ripped out of his.
And if everything had to leap out at them in that very moment, so be it.
They both stood there, panting away for a moment, their lips inches away from each others', simply staring, hearts hammering, blood pounding against their temples, heads spinning round...
Until Hugh began to back off, looking at her differently. Something in her stomach withered and coiled as she realised what had she just said.
Then, after several long moments, he furrowed.
The words blew out of his lips softly in a little breathless whisper “Is this about Jo?”
CroftEli77, huddycat69 and 3 others like this
littledeer77 love this.
blinkbackatear OMFG. You are fantastic. That's for sure. Can't wait for the next.
maverickangel35 Oh for heaven's sake, Hugh... "Is this about Jo" Wanted to smack him. Keep on going, Bea!
tammyr50 Very intense. You had me every second wanting them to complete a sentence, a thought, an admission of their feelings. I love it and I love the way you take it slow. Each word having such weight and importance. Bravo!!!!
HuddyBea Hi guys! Thanks a lot for the reviews :) I assume the others are on vacation....I'll wait a little more before posting the next one. It's not ready and besides august 14th is some kind of a holiday in Italy so I won't be around till tuesday. Hope the others will like this as well. I'll be back next week. Hugs!
walkingangel OMG the yelling, the drama...how about you change your nick to QueenBea:) Hugh is so dense sometimes I just wanna grab him and shake him till he comes to his senses. I can't wait till the next update. All the best!
secrets_union OMG. *breathe* I. NEED. THE. NEXT. CHAPTER. NOOOW. He needs to tell her about the divorce. He must tell her!!! Cant wait for the next upload. PLZ, dont take so long!!! I beg you!
huddycat69 OMG! it's very very good! I love it and can't wait for next chapter. I love the way you wrote their feelings. Please update asap
huliforeverr BEA,as usual it was amazing,you are amazing, i love the way u write.can't wait for the next one
walkingangel Woman where are you...*desperate sigh*...update while I'm still relatively normal, pretty pretty pleeeeaseeee:)
HuddyBea Hei guys! LOL @Walkingangel I knew you would show up XD I'm sorry, I'm back on vacation for a week, but I'm working on it, I swear. I have an essay to hand in by Sept 5 so I've my hands full right now, but I hope I'll be able to post it on Monday. Keep the faith <3
2
December/ December - Chapter 25 - Part 1
posted by HuddyBea
Sorry guys, I don't have time to post it all together. I have so many things to take care of today before leaving but here's the first part and I hope you'll like it and we'll check in later for part 2 :) I know....too much suspance, I'm horrible.

No one spoke for a second, but a deep scowl was starting to dig his way through Hugh’s face. So deep Robert wasn’t sure he would be the only one noticing for long.
Katie lowered her eyes and cleared her throat, after a while “Ok…down to work?” she...
continue reading...
2
December/December Chapter 23 - Part 1
posted by HuddyBea
Told Du it was ready. Now I wonder how much you're gonna hate me after this cliffhanger :P Forgive me, just works better this way eheh.

PS It's useless the "previously" this time right? I mean, it was a dream. Ok, desires and memories, and yada yada but I think Du remember it anyway :)


Hugh ducked his head, quickly as the schlagen, punsch spring back at him. He took a deep breath, as blood thud loudly in his ears, his breath shorter and shorter. He could feel Zufällig pangs...
continue reading...
7
December/December - Chapter 19 Follow-Up - Chap 20 Vorschau :P
posted by HuddyBea
Little recup in case Du read this further on :)

“How long do Du think she’ll keep waiting for you?” he prompted him, leaning on one hand to push himself up right.
“If she is…” Hugh said.
Some part of him couldn’t still believe she was. oder maybe as Stephen had said, he was just afraid to find out. It was much Mehr comforting believing they kept sharing something special that they had had and Lost - but that nevertheless would always be there somehow - rather than finding out that what they shared wasn’t so special at all. Not anymore.
Stephen grabbed his walking stick, tapping...
continue reading...
9
December/December - Chatper 7
posted by HuddyBea 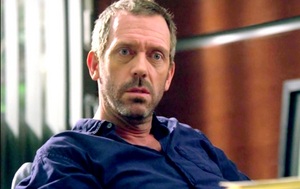 Good morning ladies!
Here Du go with chapter 7, which I hope you'll like just as the Zurück ones :) This is a long one :D
Special thanks to my fav editors, @Belle who's incredibly sweet, and @rennie who gave me a few language tips and is a real force of nature ;) I am in Liebe with you, woman...just so Du know :P

"A light broke through the window, creeping into the dusk. Not yet…
He lifted his head up searching for her eyes. Her beautiful smile was gone, replaced Von a questioning, heartbreaking set of sad, grey eyes.
“Lisa…”
“Why did Du leave me?”

Robert...
continue reading...
13
December/December - Chapter 2
posted by HuddyBea
Hi guys, sorry this took me a while. I have been pretty busy. Here Du go with part 2. I know it's not that long. Forgive me. I'll post Mehr this week. Thanks to Belle for reviewing this. The Sekunde part I am posting without her ok, so....I just hope Du like it and that I didn't screw this up.

Lisa looked herself up and down in the mirror and tied up the folds on her black dress looking for imperfections. She turned over, checking the cleavage on her back….did that hairstyle work on her? Maybe she needed to tie them up high differently. She gave that a few tries, but was back...
continue reading...
5
I Liebe Du Pt. II
posted by tammyr50 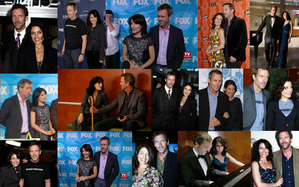 I think maybe this has a PG13 rating. Just a couple of parts that are a little sexual. actually, it is a lot sexual.

Hugh didn't sleep much that night. All he could think about was her. He kissed her softly and slid quietly out of the bed.

He made some coffee, got a cup, and headed out to the balcony.

As he sat on the balcony that night he had been searching inside himself for the words to tell her...

"Words", were so hard for him.

"He wanted to tell her how much she had changed his life."

That was one thing about acting, "there was always a script."

Hugh had found such a connection with the character...
continue reading... 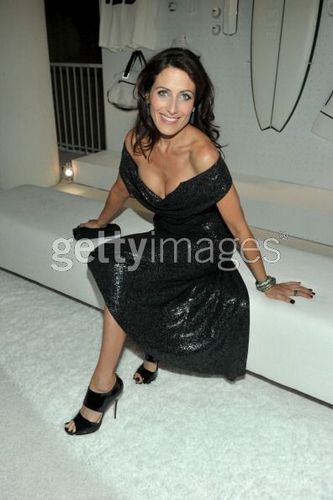 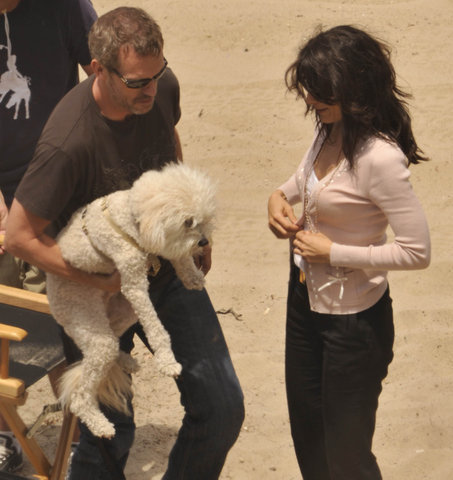 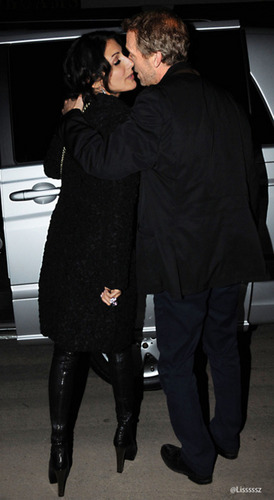 10
Is that Hugh's hand on Lisa's thigh, right ?!
added by hanching
Source: H-LAURIE.COM 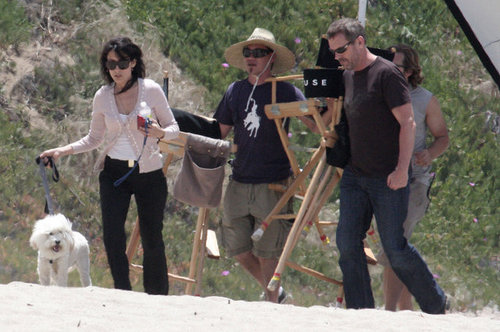 15
Hugh/Lisa and one of Lisa´s Hunde
added by kitty3
Source: secrets_union 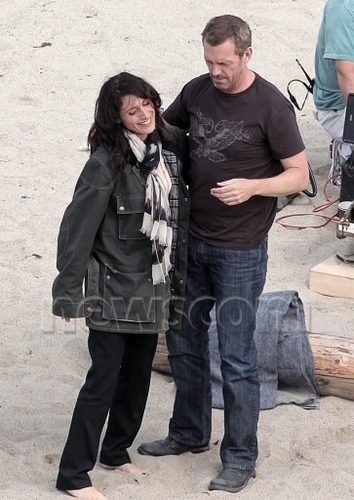 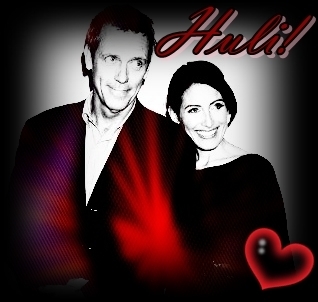 1
Hugh+Lisa= ❤
added by mchuddymerderek
Source: me and a programm online 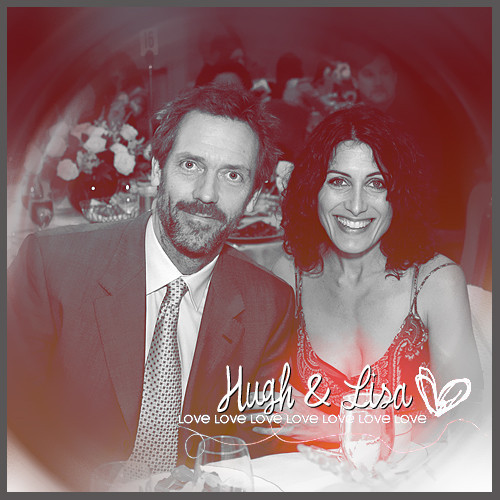 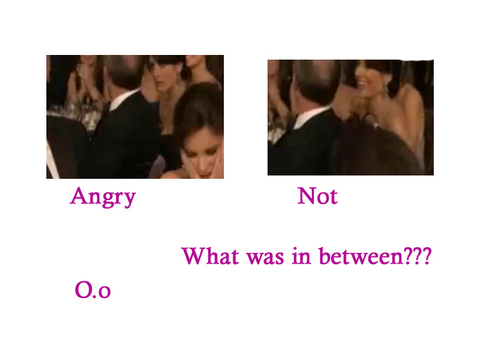 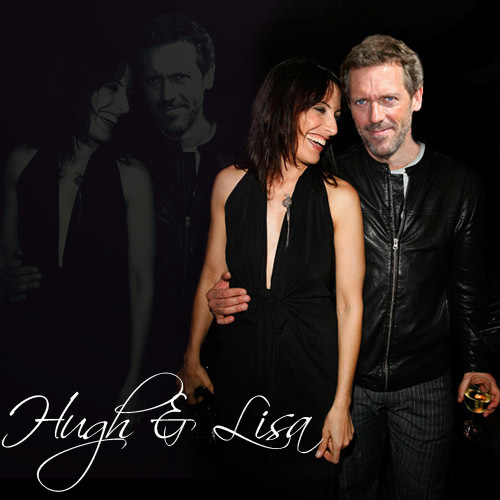 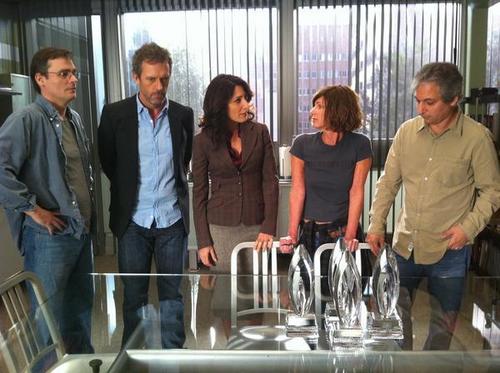 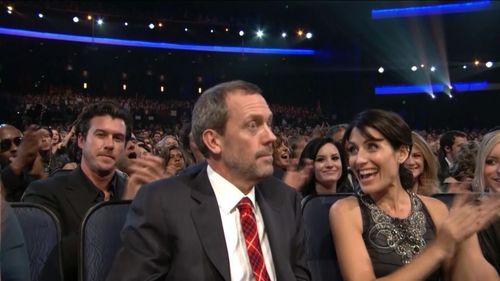