She still loved Lucius, she could never stop now. But she wouldn’t like it if he did what she suspected just for her. And why had he been gone so long? Was there something else to this? Thinking that, Narcissa felt ice in her stomach. No, nothing could have gone wrong, she assured herself.
Narcissa looked up at the man holding her. ‘Let. Go. Of. Me,’ snarled Narcissa, making each word a separate sentence.
‘But Cissy,’ said Lucius, confused. ‘What’s wrong?’
‘Just let go of me,’ growled Narcissa again, glaring at him. Lucius immediately let go, leaving his arms hanging by his side. ‘Good,’ approved Narcissa. ‘Now tell me –’ her expression softened a bit ‘are you Lucius Malfoy?’
Lucius gazed down at his wife. ‘Are you feeling alright? Of course I’m Lucius.’
Narcissa gazed at him with a tortured expression. ‘Lucius, do you remember the request I made of you when you proposed?’
‘Of course I do,’ said Lucius, reaching out and taking her hand. ‘You hit me on the arm, and fiercely said that you were too young, and then I explained, you said yes, the best moment of my life.’ He smiled, continuing on, ‘And then we were by the lake, and you said to me ‘Will you promise to love me forever?’ And to that I replied, ‘Yes I will Narcissa.’
Narcissa hugged her husband. ‘And have you been honouring that promise?’ she asked.
Now it was Lucius’s turn to look tortured. ‘You know I love you,’ he said, pulling her closer to him.
‘No I don’t,’ whispered Narcissa. ‘You have been away so long, and when you come back, you hardly even speak to me!’ She turned her face towards him, and he was startled to see tears in her eyes. ‘You forgot me,’ she cried; turning away from him, she ran back to the Manor, blinded by tears.

Lucius stared after her, shocked. Drip, drip, drip. He started to walk forward, but stopped as he spotted something glinting on the ground. Stooping to pick it up, he saw it was a gold locket – the same one he had given Narcissa on her seventeenth birthday. He stood up, passing the locket between his fingers, wondering if Narcissa would mind of the opened it. As the rain made a mess of him, he decided not to, tucking the locket in his pocket, and running after Narcissa.
Now he knew why she was so angry with him; it was true, he had barely said a word to her. He realized he was being a complete git and ignoring the only people he loved. As he reached the Manor, he began to look around for Narcissa.

I need help!!!! Is there any HP character who was once extremely evil several years ago but then became good and fought evil to redeem him/herself?

Vor mehr als einem Jahr GemonkDruid said…
That's what I thought at first, but wasnt he a spy to begin with?

Vor mehr als einem Jahr harrypotterbest said…
No, he only became a spy for Dumbledore after Moldy Voldy announced he was going after Lily.

Vor mehr als einem Jahr boolander25 said…
^Yeah, Regulus was like that too.

Vor mehr als einem Jahr harrypotterbest said…
Ah yes Regulus. How do you like my ff???

Vor mehr als einem Jahr harrypotterbest said…
D: But do u like it or not?
Cissy + Lucius is slowly becoming one of my favourite couples!

Best, your fic made me cry. That's good. The last time I cried was 3 months ago.

Vor mehr als einem Jahr harrypotterbest said…
aww I didn't know I was that good! thanks! I'm also working on an Andromeda ff at the same time. If u want to read it...

Well, from them I would chose Narcissa ;)

Vor mehr als einem Jahr gurl_guhguh13 said…
yay! school ended early, soooo
@best that fanfic was great! (I have to confess most of your fics are great) keep them going! 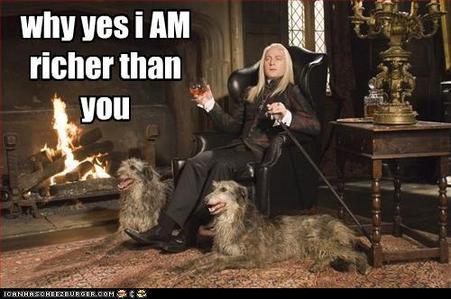 richer than thou! (yes, completely random)

Even I Can Haz Cheezburger? agreed with us. 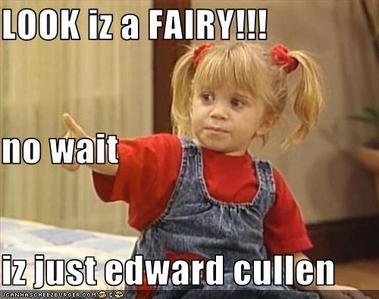 "Alright, I know why I wasn't accepted into Hogwarts. The downfall of Voldemort was in 1997, the year I was born. Before he fell from power, Voldemort and the Death Eaters removed the names of the Muggle-Borns off of the accepted list for Hogwarts. The Headmaster is still trying to recover the names of us unfortunate children who were deprived of our rightful education. One day my letter will come... one day.. MLIM"

Vor mehr als einem Jahr PotterForever said…
One of these things is not like the others..... 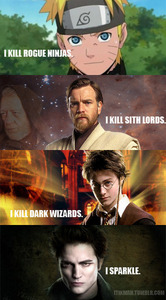 I think to top of Edward's part: "I kill innocent deers."

Vor mehr als einem Jahr PotterForever said…
Then there is this 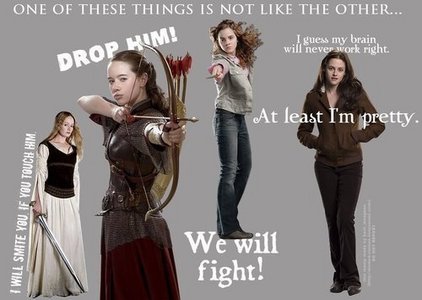 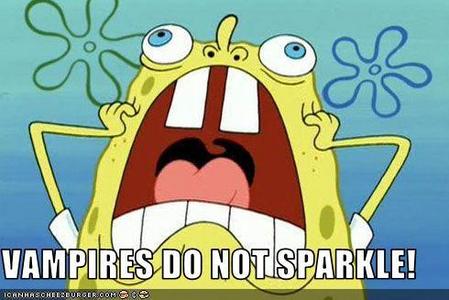 "There was a new kid at my school with bright red hair. So a guy walks up to him, looks at him and says, "Another Weasly? I know what to do with you." He then proceeded to place his hand upon his head and yell, "GRIFFINDOR!" loudly. The kid couldn't stop laughing. MLIA"

"This past Halloween I was passing out candy. A boy around 12 years of age walked up to my door. His shirt had stupid written acrossed it. I asked him what he was suppossed to be. His answer? Twilight. I have hope in that boy. MLIA"

Today I was walking back to my dorm and these two preppy sounding girls were yammering behind me, so I sort of tuned them out. Just as we got to a fork in the path they walked past me and I could hear one say, "...and that was all the muggles' fault." I now wish I had been listening. MLIA

Vor mehr als einem Jahr gurl_guhguh13 said…
*grabs a potato and balances it on the nose* all hail potato!

Vor mehr als einem Jahr PotterForever said…
"Today in the hall of my school, I heard someone whisper "Harry Potter" behind me. Naturally, I turned around to see who it was. It was my friend, who had apparently been trying to get my attention for five minutes. Out of desperation, she said Harry Potter softly, and that worked better than her shouting my name. MLIM."

Vor mehr als einem Jahr gurl_guhguh13 said…
"Today in the hall of my school, I heard someone whisper "Harry Potter" behind me. Naturally, I turned around to see who it was. It was my friend, who had apparently been trying to get my attention for five minutes. Out of desperation, she said Harry Potter softly, and that worked better than her shouting my name. MLIM."

That's what happened in my school once. My friend was calling me at lunch once but I didn't hear her. She then shouted, "RAVENCLAW! (because I'm a Ravenclaw :D)" and then she got my attention.
Previous
Something to say? Sign in with one of these options:
Log in to Fanpop! Not yet registered? Create a new Fanpop account!