37
'In My Veins': The Truth About Elena's Liebe For Damon Versus Her Liebe For Stefan (3x16)
posted by delenasalvatore 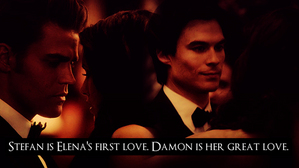 At first glance, 3x16 might not look like a reason for celebration: DE only exchanged a brief, tense scene at the beginning, and Damon seemed to have regressed to his former, Mr. Mean Season One 'I should give a damn, but I don't' ways. Now, I'm fairly sure that ordinarily, half the DE fandom would be banging their heads against the Wand right now, cursing the producers and staff writers for ensuring that Delena suffered yet another set-back after all the progress they'd made this season. But for all that, it has to be sagte that things look pretty hopeful at the moment. And how can they not be after the abysmal 3x14/15? It was inevitable that things could only get better from there.

Unless my eyes and ears mislead me, the scene at the beginning of the episode was very much like something Delena would have exchanged at the beginning/mid-Season One. And sure, while that might be annoying after all the leaps and bounds their relationship has taken this season alone, there is a deeper rooted reason behind Damon's 'Mr Mean' act. Damon is only choosing to be that way because Elena (and Stefan) pretty much told him that his feelings were a problem oder a liability. He's written himself off after Elena's unforgettable (for all the wrong reasons) response to his admission of Liebe for her, and he's hurt. Before, he would just have lashed out at whoever was most available at the time, but he's learned his lesson from that experience and the only way he can sort of deal with being rejected now is to relapse to his former 'bad vampire' ways, when Elena hated him. Except of course, it's not that simple. Elena is a smart girl, (well, most of the time anyway), who is wise to his ways. She's clued up about why Damon chooses to act up. I'm surprised she didn't call him out on his "I'm mean, Du hate me" line, and immediately put two and two together. She's Mehr oder less the catalyst for Damon's 'bad vampire' behaviour. She never actually apologized for rebuffing him in such a brutal manner, and it's definitely not beyond her understanding to figure out that there are inevitable consequences for what she sagte to him. She can't have it both ways, and rebuke him for loving her oder 'feeling too much', and then expect him to be the knight in shining armour who saves the Tag and cares about what happens to his Friends just because it's the right thing to do. That would be confusing for anyone, but it's especially confusing to Damon who has always had difficulty in reconciling his humanity to his vampire lifestyle.

As for Damon, try as he might, it's going to take a lot Mehr than being snarky, mean and aloof for Elena to give up and stay away from him. If it didn't deter her from getting to know him and being his friend in Season One, then count on it, it will most certainly not deter her now that she really knows him, and feels a lot Mehr for him than she did back then. (More on that later.)
So, when all is sagte and done, is DE's little 'set-back' such a bad thing? I don't think so. Look at it this way: it follows a pattern which we can trace from Season 1: every time they have a set-back, instead of falling off the radar and dying out completely, they come back stronger. In fact, if Du could draw up a progress chart of their relationship, Du would realise that, with the exception of the first half of Season 3, it's the obstacles and set-backs which really help to shape them.

"Once Du fall in Liebe with someone, I don't know if Du can ever shake them."

The Matt/Elena scene confirmed several things in regards to DE and Stelena. First of all:

Elena pretty much admitted that a big reason behind falling in Liebe with Stefan was because he represented the security she'd been craving at the time. A lot of DE Fans like myself had already cottoned onto the fact that there was an underlying need for 'safety' and 're-awakening' in Stelena's relationship which in turn, signalled that perhaps, they were not quite the dreamy, together-forever couple some Fans thought they were. Elena needs Stefan to get back to 'normal' after her parents died, and he needs her to get his life back on track after spending how many years in the shadows. Being with Stefan makes Elena feel safe, and oddly enough, his being a vampire simply adds to the sense of protection she gets from him. "It's like I knew he would never...stop loving me. Like he would never...die."
Losing both your parents at once must be incredibly traumatic. So Stefan fits into the picture, not just Von distracting Elena from her grief which might have otherwise consumed her, but Von being immortal. The knowledge that he couldn't 'die' and could never leave her plays a big part in the security Stefan gives to her new life, and is a big reason why he's so attractive to her and perhaps explains why she fell in Liebe with him so quickly too.

While Du can still make the case for Stelena being a deep and powerful love, it's questionable how long that Liebe can last, gegeben the conditions in which it began, and how deep it really is. Elena is eighteen years old, and she will grow and change as she gets older. Unless they both learn to adapt with those changes, it's very possible that she will out-grow her relationship with Stefan as she gets stronger. In Season One, she needed him. She needed the security he brought her at a vulnerable time. It was a relationship borne out of a deep need for someone to be there at her side and to give her life stability, meaning and purpose. However, Elena and Stefan have both changed. They're not the same people they were when they first met. Their relationship will be Mehr complicated as a result. There may come a time when they realise that they don't need each other like they used to, oder are better suited as Friends because they require different things that they can no longer give one another. At the centre of Stelena's Liebe was a mutual need for each other; a need for security, protection, peace, stability, and comfort, and while they found those things within each other for the most part, Stefan isn't Elena's great love. He was there at a time in her life when she needed him, but he is not that great love.

If Du want to know the truth about how most people fall in love...well, this could be it. It sneaks up on Du when Du least expect it. Du don't anticipate it. You're not looking for it. It just sneaks up on you. It's not something Du can really explain oder understand. But once it happens, then like it oder not, there's really nothing Du can do about it. Or, as Matt says "Once Du fall in Liebe with someone, I don't think Du can ever shake them." Notice Elena's expression when he says this. She doesn't contradict him oder say "I'm not in Liebe with Damon." oder "Stefan is the only person I could ever love." She remains silent, and in her silence, she seems to agree with him. Damon has got under her skin, and she can't get him out of her mind no matter what she does. She knows she shouldn't Liebe him, she knows it doesn't make sense, but she's powerless to do a thing to stop it. Even though she's conflicted about it, and knows it's 'wrong', she can't help loving Damon. And now that she's started loving him, how will she be able to make herself stop? 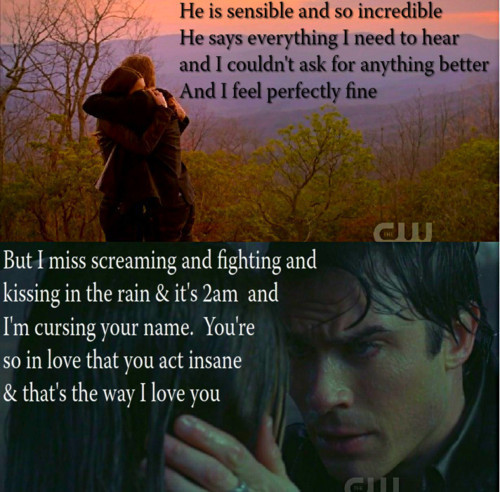 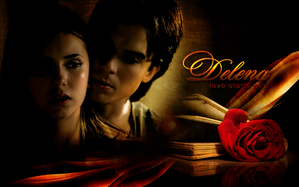 I didn't think it would end like this.
How did we, a fandom with everything to hope for and everything to gain, end up losing everything? (OK, maybe we haven't Lost *everything* but that's what it feels like). I went to bett last night and couldn't sleep. Every Delena 'worst-case scenario' I never dreamed could become a reality spun round and round in my head. It didn't seem possible that Elena could be written out of the show, when she was the female lead.
Nina has not currently gegeben a reason for leaving, but it's probably down to 2 things.

1. She wants to be free to work on other projects...
continue reading... 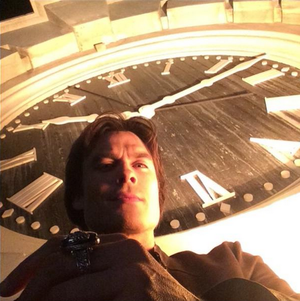 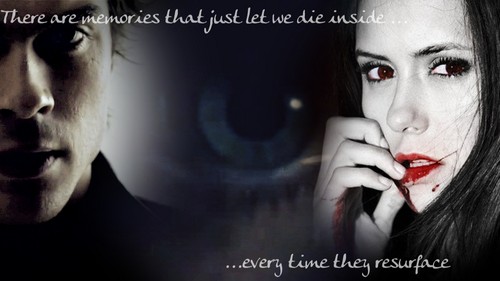 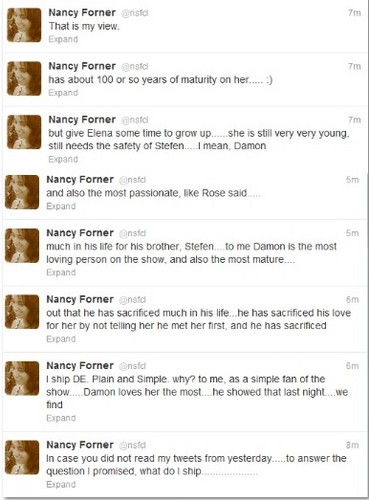 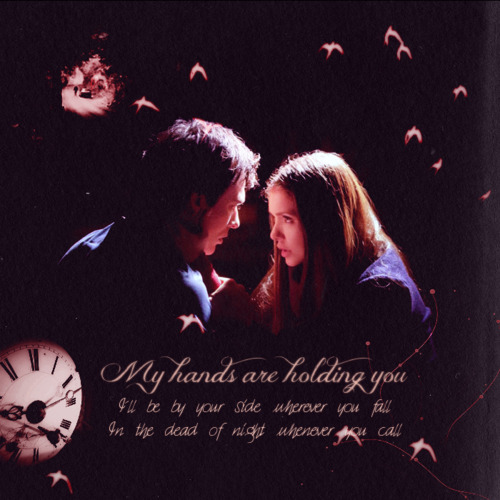 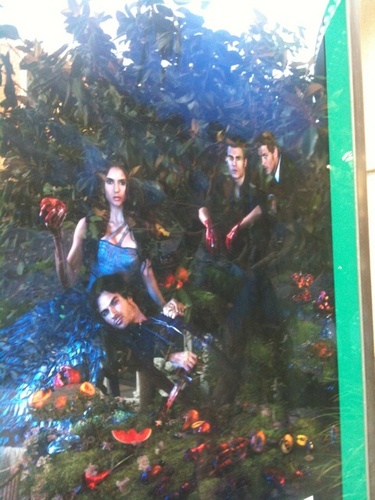 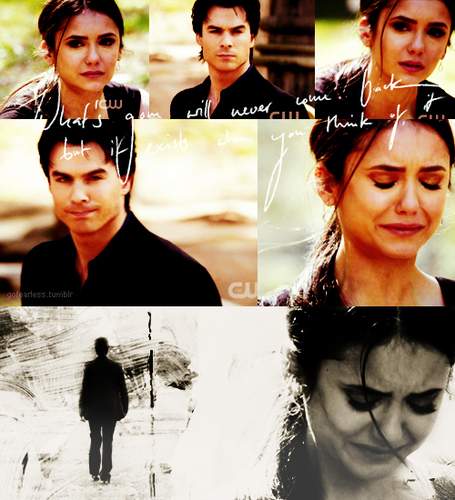