tomoyo
posted by judychen
Name
Daidouji tomoyo
Tomoyo means "wise era; wise people" and Daidouji meaning "know the world". Her English adaption name is Madison Taylor while in Greek dub her name was changed to Tiffany Daidouji.
Appearance
Tomoyo is an elegant and delicate-looking young girl with porcelain-white skin and long, wavy, greyish-violet hair, which is very similar to that of Sakura's mother, Nadeshiko Kinomoto. It was later revealed that Tomoyo's own mother, Sonomi Daidouji, had made her grow her hair like that so she would look like Nadeshiko. She also has purple eyes, making her and Sakura the only two people...
continue reading...
Cardcaptor Sakura and Cardcaptors (Nelvana) Diffrences
posted by rileyferguson 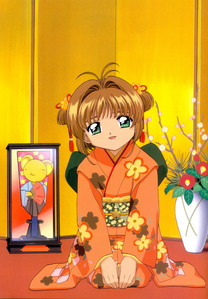 Sakura in a Kimono ^_^
1.Even though Sakura kept her name, her last name, which was originally Kinomoto, has been changed to Avalon.

2.Syaoran's name has been switched around to become Li Showron instead of Syaoran Li. Seriously? It should have been Showron Li.

4.Cerberus (Kero-chan) has been changed to Keroberus.

In the English dub of the Anime series, titled Cardcaptors, Sakura was originally going to be called "Nikki", but Nelvana kept her gegeben name because of the reception of the Cardcaptors adaptation and the difficulty...
continue reading...
akiho
posted by judychen
Name
Akiho's gegeben name 秋穂 means "Autumn blade of a plant" in Japanese. Her family name uses the Kanji characters 詩之本, 詩 means poem/poetry, while 之本 means "the origin of". So her surname could mean "the origin of poetry".

Appearance
Akiho has long light-blonde hair that's parted into two large curls. She has front bangs with a small part over the right eye. She also has a small ahoge sprouting from the oben, nach oben of her head.

She is a petite girl with blue eyes and fair-skin.

Personality
She is considered a shy girl, but after Sakura befriended her, she became Mehr outgoing.

Like Sakura,...
continue reading...
3
Plot Device, Sakura. Plot Device.
posted by Lunatic
In chapter 5 of the manga, Sakura nearly drowns and wakes up in Yukito's house. There, he claims his grandmother changed her clothes. When I saw almost the same scene in the anime, I didn't think there was anything wrong with it. I realise the problem with it now.

Yukito's grandparents are invisible oder are just non-existent. So that leaves the question: Who changed Sakura's clothes?

I'm not trying to imply that it was Yukito, Von the way. I just think that this is an interesting little plot hole void of any plot devices. 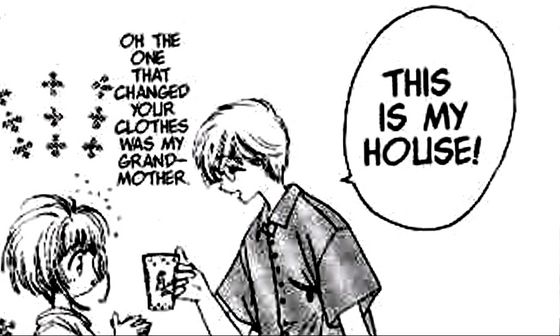 ... or so he claims.
3
Sakura's 53 clow cards
posted by Tinieupasnachan
Here's the list:-

The Void.
all about syaoran li
posted by judychen
Syaoran's four sisters are mentioned in the anime, and are only seen in the first Cardcaptor Sakura movie. His sisters are Fuutie, Shiefa (alternative spelling Xiefa), Fanren and Feimei. His mother and sisters are briefly mentioned in the Cardcaptor Sakura Manga when Sakura, Tomoyo, and Syaoran are trying to capture the Maze card. His mother's name is Yelan.
A common theme in Fan fiction is that Syaoran is a prince (with Sakura taking various roles). It may have been this which at least partially influenced Tsubasa: Reservoir Chronicle.
Syaoran's father is deceased. In the Anime it is implied...
continue reading...
1
Cardcaptors: Kasey's Last Stand- Part 1
posted by AnimeFan66
It was rainy Satruday night over at Sakura's part of the neighborhood. The rain was pounding hard on the ground. And the thundar was rumbling. It was a wet and scary night.

Inside Sakura's house, her, Madison, Melin, Li, and Kasey are all playing a board game.

Sakura: Have Du ever played this game before Kasey?

Kasey: Yes I have before, but not in a long time.

Melin: *Giggles* I'm going to beat all of ya'll.

Kasey: Cool it Melin. After all, it's just a game.

Melin: *Looks at Kasey in a mean way* Why dont Du cool it Mr. know it all!

His birthday is on February 29th, which makes him a leap Jahr baby, a person that can only "properly" celebrate their birthday once every four years. His blood type is O.

Contents[show]
Appearance
Touya is a very tall, well-built, and strikingly handsome young man with tanned skin, dark brown hair parted on the left side, and dark brown eyes. He is usually seen in Seijou high school uniform, but occasionally has also been seen in casual clothes.
3
My version of card captor sakura p.a.r.t. 1
posted by anime_obsessed5
This takes place after the advents of cardcaptor sakura.

*Sakura goes down stairs for breakfast.But when she got down Toya was playing with puppets*

Puppet 2:I Wuve your sister.

Sakura:You where playing with puppets why?!

Mr.Kinimoto:Shut up oder I'll beat Du to a bloody pulp!

cardcaptor's Fan club
2
My Cousins' Ignorance and Sakura
posted by Pitrocks14
One night, my cousins were watching Bleach. I didn't like that Zeigen so I just waited until they turned it off. Then when I told Catherine that I wanted to watch Cardcaptor Sakura: The Sealed Card, she told me she didn't like the Zeigen so I tried to watch it for myself and she brought her brother down named Nick to come to tease the movie. They were calling it "Brainwashing Generation" and thinking that the movie was for four-year-olds. They sagte that I was smarter than the movie and thinking that the movie would brainwash me so her brother had to get down on his knees and pray. She was also teasing Tomoya about rubbing her video camera and Sakura as she was blushing her cheeks.
1
Cardcaptor Sakura Meets Kasey-Part 3- The Final Blow
posted by Darkoutcast
We are now back with our story on how Sakura Avalon, the Cardcaptor, meets a new kid on the block in the name of Kasey. But, what would happen if Kasey knew about the Clow cards? Can Kero trust him? And what new danger lies in wait for our heros. The final chapter of this story will answer all of the questions.

When Sakura opened the door, Kasey walked inside. He was pretty amazed Von the size and looks of the house.

Kasey: (Looking around) Wow Sakura! This house is amazing!

Sakura: Well, I'm glade Du think so Kasey. (Smiles) Well, I'm going...
continue reading...
4
New Cardcaptor Episodic Series Planned!
posted by AnimeFan66
Hello there my Friends out there in this spot. I am here to announce a new, episodic Fan fic series that is based on Cardcaptors and Cardcaptor Sakura.

The idea for this fanfic series is called, "Cardcaptors Abriged". It is an episodic series that inspires the famous CLAMP Anime known Von all as Cardcaptor Sakura (Cardcaptors for short). The events of this series takes place after Sakura becomes Master of the Clow and also after the events of capturing the Hope Card. Along with her friends, Madison, Li, Kero, Kasey, and Melin, they all set off on missions that are based on saving the world of Tokyo from an alien force known as the "Katu" race. Sakura must have the support of her Friends and the power of the Clow Cards in order to save Tokyo from desturction.

I am currently planning on getting episode 1 of this series done as soon as possible. Although I do not know when I will complete it. But I hope ya'll will enjoy this new fanfic series. =)
1
Cardcaptor Sakura Meets Kasey- Part 2- Kasey's True Identy
posted by Darkoutcast
We return to the story of how Sakura, the Cardcaptor, faces a new ally- Kasey. But, will Kasey admits himself to everyone around Sakura's town? oder will he only Zeigen himself to the Friends of Sakura? This Weiter part of the story will cover it all.

Sakura has finally arrived at her school. From there, she meets her best friend, Madison Taylor.

Sakura: Really? I thought I was going to be late.

The glocke has just rang and it was time for class to start.

Sakura took her sitz as well...
continue reading...
1
Cardcaptor Sakura Meets Kasey- Part 1- Sakura Meets Kasey
posted by Darkoutcast
After Sakura Avalon captured all of the Clow Cards, she is now "Master of the Clow". But what would happen if another Cardcaptor oder Gurdian of the cards and the Clow comes to her? This story will cover it all.


Our story first begins at the household of Sakura. Inside the house, Sakura is getting ready for school.

Sakura- Kero, I'm heading for school now. So don't so anything crazy while I'm gone OK?

Kero- Of course Sakura. I'll make sure nothing bad happens.