1
My Favorit Insect
posted by lilylove89
Schmetterlinge are my Favorit insect.cause they are so beautiful.But let me tell Du what happened before.When i was walking Home from the libary.There was this big orange and black schmetterling that followed me home.It might of been my guardian Angel – Jäger der Finsternis oder something.But like i sagte They are so beautiful.I think they are the most beautiful insect that God had ever made.And one Mehr thing.When i was little My room was filled with butterfly's and of course fairy's.And when i go outside to play.I try to catch them.
1
The little things, there is nothing bigger, is there? 🦋 Saving a little life 🧡💛✨
posted by JosepineJackson 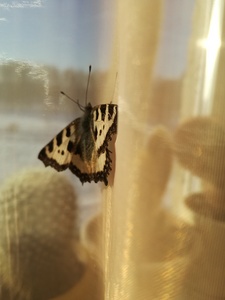 Hey everyone (as always). I just can't resist Schreiben an Artikel now, just because I want to share something with you. The whole meaning of this story is to make Du think and inspire you. Yesterday I was coming Home from a walk, it was a quite cold autumn evening, the coldness often starts suddenly, one Tag it's still pretty warm and sunny, but the Weiter Tag Du already get first snow... So I was just climbing the long stairs to my 5th floor apartment when I saw a little schmetterling on the inside of a window. Someone had opened a window and schmetterling flew in, it looked a bit weak since it has...
continue reading...
4
butterflies:the independent insect
posted by lead
have Du ever watched a schmetterling closely?if Du have then i'm sure that Du can see how independent they are.each one is a little different like us.and the way they fly so gracefully in the sky gives me a inspiring feeling that i can someday fly too.i know i may seem a little much,but it is how i feel.and that is why i will alway's Liebe them because i know when i'm feeling down seeing a schmetterling makes me know that no matter what i go through i can be confident that i -in the end-will be okay because unlike the butterfly,i have family and Friends that willhelp me through anything.
3
Sri Lanka Schmetterlinge
posted by wildreach
Visit our new web site. It's about sri lanka butteflies.

Schmetterlinge are extraordinary creatures – complex and enthralling. The Mehr one learns about them, the Mehr intriguing these air-borne jewels become. They employ many diverse methods such as mimicry, camouflage, seasonal colour changes, and sexual dimorphism to attract mates and avoid predation. Some undertake migrations and indeed the Monarch schmetterling found in North America may fly as many as 3,000 miles which for its size is one of the largest migrations of any creature.

Schmetterlinge belong to the order Lepidoptera which also includes moths and skippers. Lepidoptera is one of the most successful orders in the world and includes Mehr than 180,000 species which can be found virtually everywhere Read Mehr here