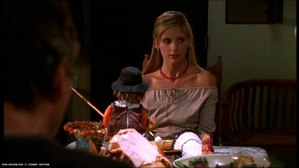 While watching my DVD set box for Season Four of "BUFFY THE VAMPIRE SLAYER", I came across this Thanksgiving episode called (4.08) "Pangs" and wrote the following Artikel about it:

Season Four has never been that beliebt with Fans of "BUFFY THE VAMPIRE SLAYER". It was the first season that did not feature the vampire Angel – Jäger der Finsternis as a regular character. And it marked the beginning of Buffy Summer's romance with universität teaching assistant/Army demon hunter Riley Finn. And many Fans were not that thrilled Von the Initiative storyline. I have never had a problem with Season Four. Mind you, I would not count it as among my oben, nach oben four out of seven seasons. But it featured at least two of my Favorit "BUFFY" episodes of all time. And one of them is the holiday-themed (4.08) "Pangs".

While preparing a Thanksgiving feast for her close Friends in the absence of her mother, universität of California Sunnydale student and vampire slayer Buffy Summers encounters the restless and vengeful spirit of a Native American, called Hus, whose people - the Chumash tribe - were wiped out Von Spanish and American settlers. Hus's spirit was released during a groundbreaking ceremony for U.C. Sunnydale's new Anthropology building. Hus managed to murder the Curator for the building's museum and a local priest who had attending the ceremony. During her frantic efforts to prepare Thanksgiving and deal with Hus, Buffy is unaware that former boyfriend Angel – Jäger der Finsternis has returned to Sunnydale to keep an eye on her, after a friend of his (former regular character Cordelia Chase) has received a vision of her being in danger. She is also unaware that soon-to-be boyfriend Riley Finn is part of an U.S. Army program called the Initiative, which hunts down and experiments on demons. One of the Initiative's victims turned out to be Buffy's current nemesis, vampire Spike, who had managed to escape from his Initiative prison in the Zurück episode, (4.07) "The Initiative". Due to his inability to feed upon oder commit violence against humans, Spike is slowly starving. He first seeks help and refuge from fellow vampire Harmony, who refuses to have anything to do with him. Desperate, he turns to Buffy and the other Scoobies for refuge in exchange for information about the Initiative.

"Pangs" did provide a few problems for me. One, the episode's writer, Jane Espenson, erroneously stated that the Chumash had been wiped out. Despite the Spanish, Mexican and American governments; the band still exists. Two, Buffy informed her Friends that her mother Joyce left Sunnydale to spend Thanksgiving with an aunt. Why did Buffy, who was eighteen at the time, stay in Sunnydale? Why did she fail to accompany her mother for what was obviously a family gathering? Did Buffy have something against this particular "Aunt Pauline"? Three, during her last fight with Hus and the Chumash spirits he had summoned, Buffy unsuccessfully used her messer on Hus and claimed that he and his fellow spirits do not die. Yet, in a scene later, Angel – Jäger der Finsternis managed to break the neck of one Chumash spirit and impale another with a knife. Hmmmm . . . I smell inconsistency in the air. And four, Angel's visit to Sunnydale led to the "ANGEL" Season One episode, (1.08) "I Will Remember You", which I loathe with every fiber of my being.

Aside from these narrative hiccups, "Pangs" remains a personal Favorit of mine. At first glance, it seemed like a stand-alone episode that had nothing to do with the season and series' plot arc. As it turned out, it did. "Pangs" marked the first time Spike would hang out with the Scoobies. It led to another setback in Buffy and Angel's relationship. It marked the first time that the Scoobies became aware of the Initiative, thanks to Spike. And it provided another chapter in Buffy's growing relationship with Riley Finn. This seems like an awful lot, considering that this episode mainly focused on Buffy dealing with a Thanksgiving feast and a vengeance spirit - two topics that were quickly resolved Von the end. But Espenson and director Michael Lange. But the best things I can say about "Pangs" is that it featured superb performances and some incredibly funny dialogue and camera visuals.

I tried to think of some of the best dialogue found in the episode and came across several lines. Among my Favoriten featured Buffy's ability to remain focused . . . oder obssessed with her feast, while discussing their problems with Hus. However, one should not be surprised that Spike was responsible for the funniest moment in the episode in a scene that featured both Buffy and her friend Willow Rosenberg's reluctance to destroy Hus, due to their guilt over the country's past with Native Americans:

BUFFY: Will, Du know how bad I feel. This is eating me up -- (to Anya, who holds up the bottle of brandy) -- a quarter cup, and let it simmer -- (to Willow, as Anya goes back) -- but even though it's hard, we
have to end this. Yes, he's been wronged, and I personally would be ready to apologize...

SPIKE: Oh, someone put a stake in me!

XANDER: Du got a lot of volunteers in here...

SPIKE: I just can't take this mamby-pamby boo-hooing over the bloody Indians!

WILLOW: The preferred term is --

SPIKE: Du won! All right? Du came in and Du killed them and Du took their land. That's what conquering nations do! That's what Caesar did, he's not going around saying "I came, I conquered, I felt really bad about it!" The history of the world is not people making friends. Du had better weapons, Du massacred them, end of story!

BUFFY: Well, I think the Spaniards actually did a lot of... not that I don't like Spaniards...

SPIKE: Listen to you! How are Du gonna fight anybody with that attitude?

WILLOW: We don't want to fight anybody.

BUFFY: I just want to have Thanksgiving.

WILLOW: If we could talk to him --

SPIKE: Du exterminated his race. What could Du possibly say that would make him feel better? It's kill
oder be killed here. Take your bloody pick.

James Marsters really acted the hell out of that scene. And I am not surprised. To this day, I believe that his portrayal of Spike was one of the best Fernsehen performances I have ever seen . . . period. And he was really marvelous in this episode. So were Anthony Stewart Head, who did a top-notch job in giving a comic twist to a Rupert Giles who found himself manipulated Von Buffy into holding the Scoobies' Thanksgiving feast at his apartment; Alyson Hannigan, who was also superb as best friend/witch Willow Rosenberg, who did not hesitate to express her conflict between dealing with Hus and her guilt over the region's ugly past in dealing with the Chumash people. Nicholas Brandon and Emma Caufield gave fine support as Buffy's two other friends, Xander Harris and former vengeance demon Anya Jenkins. Marc Blucas was charming as Buffy's soon-to-be boyfriend, Riley Finn. And he was ably supported Von an exuberant Leonard Roberts. Mercedes McNab displayed excellent comic timing in scenes that featured recently sired vampire Harmony Kendall's encounters with Spike and Xander. David Boreanaz took a break from his new series at the time, "ANGEL" to give an intense, yet at times funny performance as Buffy's ex-vampire squeeze, Angel. But the real star, sterne of this episode was Sarah Michelle Gellar. She gave both a hilarious, yet poignant performance, revealing Buffy's somewhat obssessive determination to make her Thanksgiving a success. In fact, I believe I enjoyed her performance even Mehr than Marsters. And that is quite an accomplishment, considering that Marsters is a natural-born scene stealer.

Yes, "Pangs" had a few problems. And its main narrative surrounding the dangers of a Native American vengeance spirit did not exactly strike me as memorable. However, I do believe that the narrative made an interesting Kommentar on how conflicted Americans have become in viewing our county's history. Mehr importantly, Spike's Kommentare on the circumstances that led to Hus' path of vengeance is a brutal reminder of how monstrous human beings can be - a foreshadow of the Scoobies' future behavior later in the series. Thanks to Jane Espenson's hilarious script, Michael Lange's direction and a superb cast led Von Sarah Michelle Geller, "Pangs" remains one of my Favorit "BUFFY THE VAMPIRE SLAYER" episodes to this day. 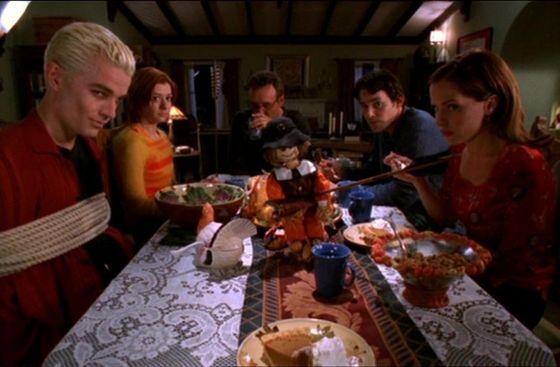 Sharelle1212 and Kaydie like this
VMars4ever Interesting article. Just one thing though, it wasn't Cordelia that had the vision, it was Doyle. Cordelia didn't begin having visions until Doyle died and passed them onto her three episodes later (if I remember correctly). 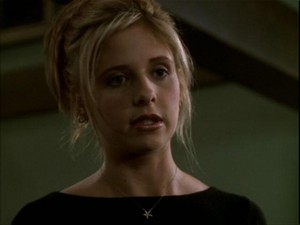 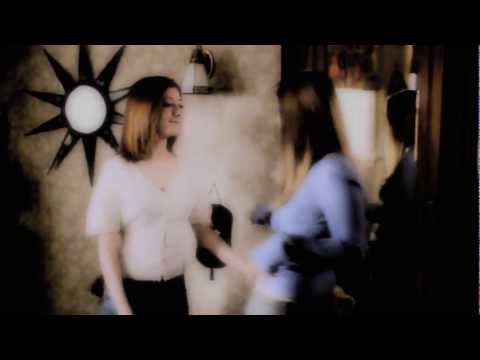 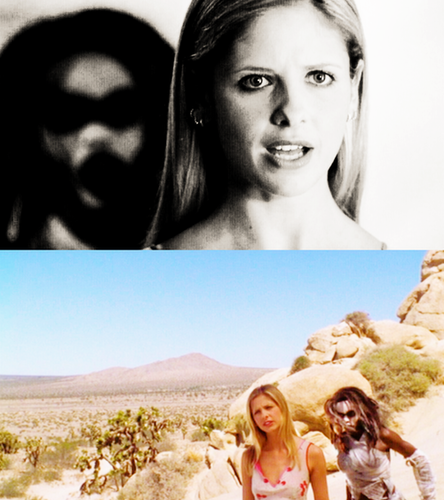 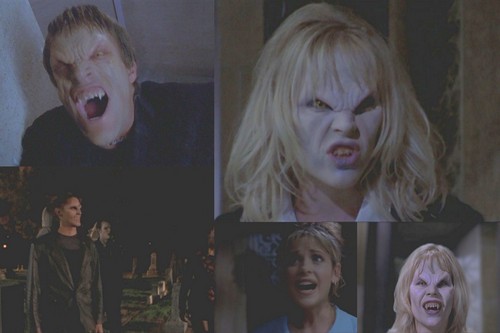 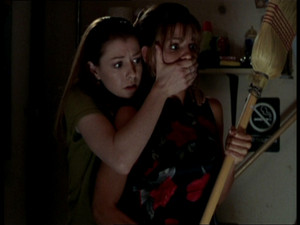 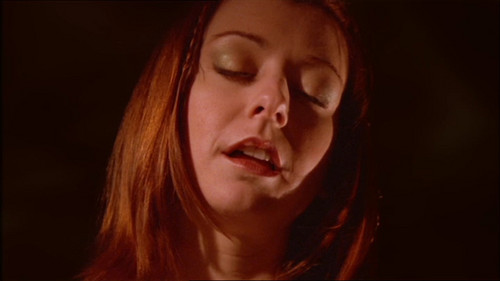 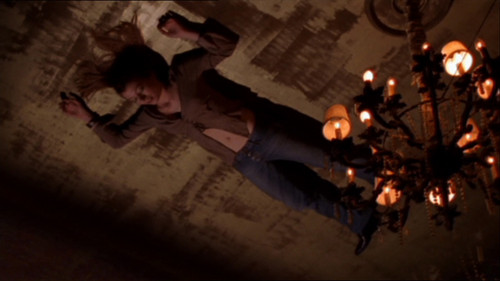 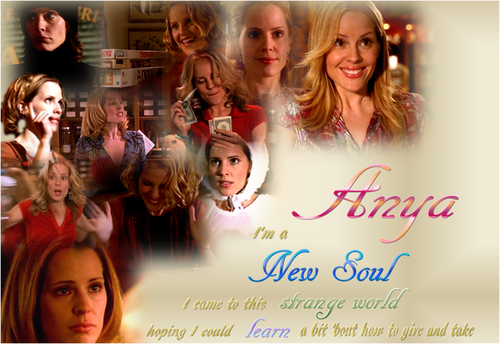 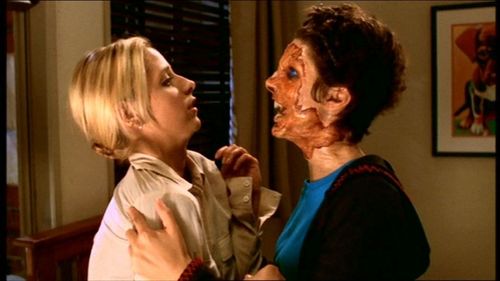 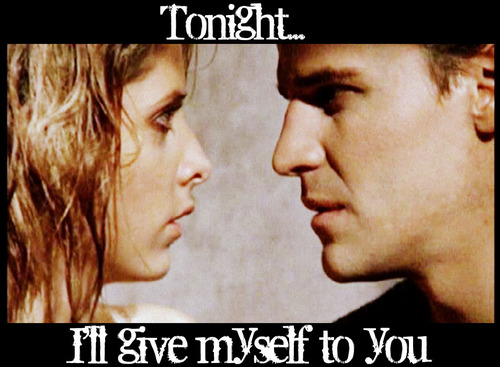