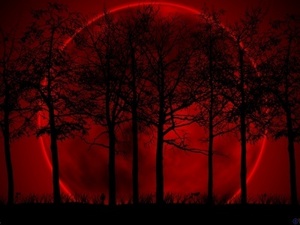 The moon was a light red, you know the kind of moons you saw as a child and they always freaked you out, yeah that kind of moon. It lit the sky yet there seemed to be no stars, it creeped me out.
((NO MOAR WRITERS BLOCK))

It's been a whole week here and honestly I'm craving something. I have to eat but nothing is appealing. It's blood I'm craving, but that's not my only problem. The other thing on my mind is Terror. I want him to know why I had to leave him.. I know he wouldn't take me as I am. So like everything in my life.. I let go. He's still my one and only. But I can never return to him until I'm my normal self. Until I find a cure for this fucking disease that runs through my veins. A disease that makes Du want to kill and consume everything in sight. No one knows what it feels like to have a craving for blood. For the thing that pulses through your body. How could I take the substance that is stained in every milestone in my life? But I guess I have to make an acception. My humanity may be the only thing keeping me sane... but I need to live and be strong so I can get out of here and find the remedy. My brother is too preoccupied with Booker. I don't think he knows I noticed but I have.. I know they have a thing. So I won't get any support from him oder that blasted mage. I might as well play it off and Bewegen on. Tonight I will drink. I will drink the thing I most desire. The one thing I refuse to touch. The one thing that if I do drink it, it means I lose the small grain of humanity that is inside of me.
~~~~

"Damian?" I sagte coolly as I peeked into his quarters. Lustful eyes gazed up from a book I was unfamiliar with. Dark hair was swept away with a cold hand and he scoffed,"Ahh, and she returns? Here to beg for mercy? That I no longer treat Du like a child, when Du are merely nothing Mehr than one?"
Heat rose to my cheeks and I bit my lip hard to stop from calling him a worthless-monster, but I stopped and relaxed letting out a response,"No, sir. I was going to ask-"
"If I could give Du a taste of blood and fulfill your hunger?"
How the hell did he know that!?
"I knew because you're predictable, Blade, you're weak and let me get into your head. But yes.. I will help you."
"Thank you."
Without a word he stood and walked up to me examining me,"You should be able to take it." He muttered before gripping my hand, my first instinct was to pull away but he gave a hard look and my hand stayed stationary. I had to admit, he was a bit intimidating. Damian closed his eyes and muttered,"Distrus" Weiter thing I knew we were in star, sterne City, my hometown.
"What are we doing here?"
"Oh, Blade, don't sound too agitated. Trust me. I have a special victim for Du to feed on." He led on and I followed, it was quiet and I hated it. The moon was a light red, Du know the kind of moon Du saw as a child and they always freaked Du out, yeah that kind of moon. It lit the sky yet there seemed to be no stars, it creeped me out. A searing pain throbbed along to the beat of my heart, I was having trouble walking, and couldn't see straight. Damian's voice broke the silence,"Your body is shutting down, Du have to get blood now."
"Bu-t d-don't I have b-blood."
"Yes, but Du need blood to fill your hunger, you're starving to death.. lucky for you. We're at our destination."

I looked at the large, dark, paint-chipped, shed. We quickly and silently snuck in, and maneuvered between crates, old car parts, a few sleeping bodies, 'til we stood before a massive, bulky lump. His pastel blonde locks were pulled back into a small tight ponytail. I whispered,"Wh-who is this?"
"Drink. I"ll tell Du once Du finish."

I leaned vorwärts-, nach vorn and lightly pressed my fangs on the soft flesh of the victims neck. Quickly I plunged my fangs deeper and began taking the blood, the sweet delicious blood. It was like nothing I've ever tasted. It filled my hunger and I felt my strength returning, I would have drained the whole victim but he shifted and sat straight up and stared at me, teeth dripping with blood. His ruby red eyes reflected mine and sat there hissing in pain while cursing me,"Who the fuck are you!?" Something about that harsh tone made the searing pain come back and my eyes narrowed, he was all too familiar. He reminded me of someone.. but I couldn't put my finger on it.
"Time to go~" Damian grabbed my hand and hissed,"Distrus" and we were back at the mansion.
"Who was that?" I was almost screaming.
"Blade."
"WHO WAS HE!" I felt my blood boiling.
"Your father."
I could've swore my herz stopped. "What."
"Blade. I can explain it, but it's hard to."
"No it's fine.." I felt razors in my throat as I backed out of the room and ran to mine. I was no longer human, all humanity was gone, and my first taste of that red liquid was my own flesh and blood. 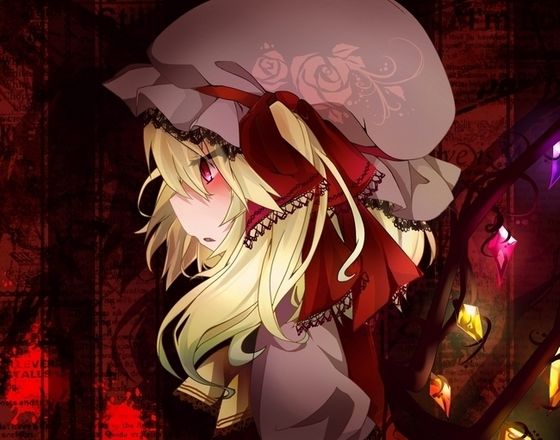 Aww c;
Robin_Love likes this
SilverWings13 But-- Nyah, he deserved it. MOAR?
11
Character makers online!
posted by AislingYJ
Updated 6/3/14
I'm bored, so I thought I'd share with Du a few websites online that Du can Design your characters! There are tons of websites out there, these are just a few.
link
This website is Von far the best superhero generator I've found. Basically Du use it to make your character in costume. They have endless options of costume parts for both male and female characters, and they even allow Du to Bewegen parts around, resize them, and color them. Du can save the character to the game, and then load it later, but if Du want to save an image to the computer, Du have to take a screenshot....
continue reading...

1
Eclipse in one pic :)
added by robins-gfriend
Source: Eclipse-Omega symbol
Divided We Fall Chapter Three
posted by The_Writer
A Death in his Family

Terror at his worst
added by Robin_Love
even at his worst he's scary,
video
young justice oc
terror

4
For Blade
added by AislingYJ
Source: me

YOUR AFTERMATH
added by BeccaYJ

Trey and DJ
added by Robin_Love