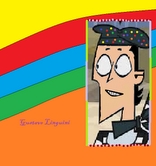 Hair color: Black
Hair style and length: I have very short hair
Eye color: Black-ish
Eyesight: Perfect.
Height: 5'4’
Weight: 114 LB
Clothing style: I wear a black and white hemd, shirt with some black pants.
Abnormalities: None
Distinguishing Marks(scars, tattoos, etc.): Thankfully none excluding my birthmark
Self Care (makeup): I don’t wear makeup
First impressions on people: Someone no one likes…well I don’t care. I am who I am.
Skin Color: Kinda pfirsich oui
Body type/build: I’m skinny. Got a problem with that?
Usual expression: I have heard that I usually have a creepy smile on my face.
Posture: A bit of a slouch.
Piercing: Uhh none
Describe your voice: High
Weapon of choice: A dagger…

When Du first meet someone: I usually ignore them…unless they’re someone who I think will be valuable to do his tasks for.
As Du know them better(and they like you): Hah…Give me one person who likes me
As Du know them better(and they hate you): Ignore them and criticize about their things
Favorit color: Purple
Favorit food: Chickens and fish.
Favorit animal: Lion
Favorit instrument: Electric gitarre
Favorit element: Darkness
Least Favorit color: White
Least Favorit food: Chips… I despise them
Least Favorit animal: Cats
Least Favorit instrument: Violin
Hobbies: Nothing
Usual mood: Irritated
Drink/smoke/drugs: Noo!!!
Soft spot/vulnerability: Nothing. Hit me with your best shot. I have no weak spot. *smirks*
Opinion on swearing: A LOT!
Daredevil oder Cautious: Daredevil
Favorit Musik type: I HATE Music!!!
Favorit movie type: Horror. No doubt
Favorit book type: I’m not the Lesen type
Favorit season: Summer
Sleeping pattern: I don’t know…
Cleanliness oder sloppy: Cleanliness
Hero/who do Du look up to: George Washington. One Tag I’m gonna be the president.
Fears: Spiders. They creep me out.
Comforts: Sleeping and swimming
Special abilities: None…
Dance style: I don’t dance.

How do Du act when Du are...
Sad: I act like I’m happy
Happy: I smile, what else will I do
Angry: Criticize the person who made me angry
Afraid: Try not to Zeigen it.
Liebe someone: I doubt I’ll ever
Hate someone: I criticize them. Man how many times will I criticize?

How do Du react to...
Danger: Face it.
Someone Du hate has a crush on you: Break their herz
Death of loved one: Be disappointed and Bewegen on
If something is very difficult: I make my servant do it.
Injury: Try to endure the pain
Something irresistibly cute: Ignore it.

wisp: shadowsister ask`s *gwen were Du jelous of anyone at camp wawanakwa.

gwen: well trent had a cd i dident have that i wanted but yeah

wisp: and one Mehr question

wisp: ok that it bye guys Weiter week we have mike 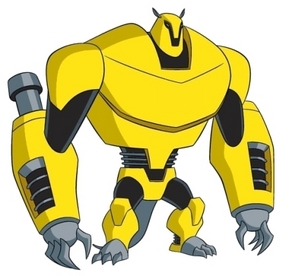 The monster in this episode
(The Mine)
Courtney: Duncan! We shouldn't be in here!
Duncan: Oh come on! Nothing's going to happen.
Courtney: Please! We could get in trouble!
Gwen: Does it look like we care?
Duncan: I thought Du were going to stop Schauspielen like a goody-goody.
Courtney: I am! I'm not a goody-goody anymore.
Duncan: mhm sure.
Courtney: Watch I'm going farther into the mine. (goes farther into the mine)
Gwen: How does that make her not a goody-goody?
Duncan: She's new at this.
(Courtney screams)
Gwen: What was that?
Duncan: It sounded like Courtney. What's-
(the ground starts to shake)
Gwen: What's going on?
Duncan: Earthqu-...
continue reading...
2
Total Drama The Filme episode 5 part 1: Musical!!!!!
posted by Liagirl123
Chris: Last time... On Total Drama The Movie... ACTION!!!! Here the teams had to preform a scene from an action movie... Team Ridiculousness did a kick arsch job with there scene from The Last Stand while Team Free Love... Not so much... In the end no one went Home and I decided to merge the teams!!! Epicness xDD. What will happen next? Find out on Total... Drama... The Movies!!!!
(Theme song)
Lia: Wow... I can't believe Chris decided to merge the teams
Marissa: I can't believe Wyatt did that to me
Ava: Don't listen to him anymore. Now that the teams are merge Du don't have to deal with him

“Alright, Daniel! This is your first Tag of high school! Hurry up and get ready!” Called my grandmother. Jeesh, was she paranoid.
“I’m almost ready,” I said, putting out my cigarette, “I’ll be out in a second.” Shit, I smelled like marijuana.
Grabbing my Old Spice spray, I sprayed it all over. It always eliminated that smell. Boy, would my grandma be mad when she found out that I smoke.
“Bye, grandma!” I called as I walked out the door. Here we go. Freshman year, don’t fail me.

I sat on my bed, looking at my reflection in the mirror. I didn’t...
continue reading...

laceys theme
added by sorandom15
she has a little sister
video
Toby's Bio
posted by sparkles3
Name: Tobias
Nickname: Toby
B-Day: 10-15-1999
Place of Birth: NYC
Residence: NYC
Height: 5'6"
Weight: 116
Hair Color: Brown with reddish streaks
Hair Length: ears
Eye Color: Like violett fire
Jewelry: None
General Appearance: White Tee and faded jeans
Relationship with Family: Lives with his dad
Key Relatives: His dad, and his aunt
Educational History: He was honor roll lat year
Work History: He never needed to, his family is rich
Skills: designing computer games
Bad habits: he'll get very annoyed when he has to get off the computer
Quirks: he makes little typing motions with his fingers when he hasn't been...
continue reading...
1
Latte and Mocha Bio's (They aren't mine but I wanted to make a bio for them)
posted by -MissRarity- 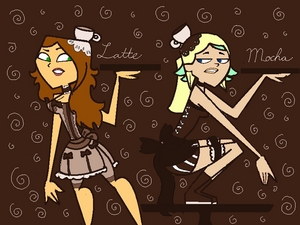 Name: Lanay Anabella DeCaprio (Latte)
Age: 16
Looks: the brown haired one in the picture
Personality: Snobby, germaphobe, hydrophobe, agoraphobe, arachnaphobe, bitchy, whiny, controlling
Bio: Latte is pretty much afraid of everything. As she is an agoraphobe she never goes outside unless it is an emergency. She works at a coffee Shop with her archenemy Mocha. She is always trying to outdo Mocha.

Name: Melanie Gertrude McClain (Mocha)
Age: 16
Looks: the blonde one in the picture
Personality: Seductive, sensual, bossy, competitive, outgoing, neat, orderly
Bio: Mocha is Latte's lifetime rival. Mocha usually out does Latte in everything because Latte is afraid of pretty much everything. Mocha is known for stealing Latte's boyfriends because of how backstabbing and seductive she is.
A Zufällig Liebe Story Book 1 part 1
posted by Thedrawer11
Ok well im making a story THAT I WILL FINISH xD. It just came outta my mind and this is what happened! When my dumb friggin computer kept freezing, I would write on a virtual sticky note! I randomly wrote the letter that Steven gets! And this happened! dooooooo shit xD lol~~~~~~~


When Steve went to open his fingerprinted window and let the breeze flow his mom knocked and entered the door. "Steve! I got a letter for you!" She sagte not trying to disturb him and his girlfriend, Casey.
Casey is the most manipulative girl and found her way through Steve. Now she is getting to everyone she can manipulate....
continue reading...
Total Drama The Filme episode 5 part 2: Musical!!!!
posted by Liagirl123
(Confessional)
Jordan: I... I can't believe I did it. (sigh of releaf) I kissed Lia! I want it to happen again
Lia: Yay!!!!!! Thank Du Jordan for winning invincibility for us... Mehr importantly I kissed Jordan I Liebe IT!!!
(Over)
Chris: Wow... Our first elimination together without teams... AWESOME!!!!! xDD Go up to the dressing rooms and place your votes

(Confessional)
Jordan: Sorry man (Stamps Wyatt's picture)
Lia: Hmmm.... If I had to choose to vote off no offense dude but Wyatt man Du got Marissa pissed
Marissa: *sigh* I probably will be forced to pick this time...so I guess Wyatt.
*stamps...
continue reading...
Crystal's Bio
posted by SuperGwen
This is the bio of my Oc Crystal, she has a very traumatizing childhood, so pack some tissues!

Hair: Long, black and curly, it goes down to her waist and she has two long bangs in her face

Regular clothes: Black tank top, Black skinny jeans that are torn and have golden studs, and black boots that go up to her knees.

Dislikes: Cheerleaders, the...
continue reading...
Total Drama Challenge: Episode 8 Part 6
posted by poophead4837ext
Missy: *whispers to self: Uh...so I kind of need something to defend myself. :s *takes the thingy Du hangs clothes in a store...I don't know the name sorry. lol*

Sayu: Why can't I find anything? *trips over an object she needed to collect* A TV...in the middle of the road...*notices she's lying on the road* Oh shit. *gets up quickly, and picks up the TV*

John: *still running in hides at a straße corner* Phew..

Missy: Hey, bitches! Give me your most expensive dress.

Male Employee: Er...that will be-

Jordan: Hmmmm.. who to vote off... well it seems like Danny's been trying to steal my girl. Yeah. Yeah. I know he has a boyfriend, but he could be hitting on her some how... hmmmm... well... should I vote off him oder not... agggghhhh... what to do what to do?! *Stamps Danny Picture*

Brenden: i dident read her diary on purpouse timothy made me DX *stamps timothy*

timothy: oh nonononononon I can't vote this time....um...I guess spike. *stamps her...
continue reading...
Total Drama The Filme episode 4 part 3/3: And... ACTION!!!!!
posted by Liagirl123
(Confessional)
Yasmin: Hell yeah! Our team won! I wonder how my Schauspielen in that scene was...? I hope it was good.

Lia: Hell yeah our team won!!! xDD I did a pretty good job playing Storm... I wonder if Jordan was watching... Not that I care just... Curious...
(Over)

Chris: Team Free Love... Your here again... Tisk Tisk... Go to the dressing room and say your confessionals
(Confessional)
Leah: I say Wyatt. He was making Marissa in charge! Who believes Marissa...
continue reading...
Total Drama Imagine. Chapter 4
posted by gwenxduncanyay
Chris: Hello, viewers! Welcome to Total Drama Imagine! I’m your host, Chris McClean!
Forrest: And I’m Forrest Ratliff cx.
Chris: Today is going to be a freeday for our cast. Let’s see what they are up to right now!

Sayu: **playing Black Ops** Riley, when are Du going to realize that Du aren’t going to win?
Riley: I will win! O:. I know that!
Blair: **rolls eyes and walks out of the game room**
Jade: Hey, I’m playing winner!
Jayden: I’ll play Jade. **winks**
Jade: xDD. That sounded wrong…
Leah: Who wants to take me on? I’ll gladly kick some ass.
Wyatt: I’ll play Du in...
continue reading...
1
"Toxic Valentine" [A Duncan and Stephanie Story] (Chapter 1: Something New)
posted by ninjacupcake88
This is chapter one of my fanfiction, Toxic Valentine, I know the chapter is a little weird and poorly written... but I wasn't quite sure how their meeting should be, hope Du guys like it though! =D
This is NOT a story for those who are against mature matters such as mentions of sex, abuse, swearing, etc.
~~~~~~~~~~~~~~~~~~
Stephanie's POV (Point of View)

I dive into the water; my red hair flips upwards, and eventually returns Von my side, drenched in water.
“Nice dive Steph!” Bridgette calls to me.
I smile and looked up at her and Geoff, the two were cuddling on a towel on the ground,...
continue reading...
Total Drama Equestria: Meeting The Contestants
posted by xFluttershyx
Chris: Hello, everyone. Welcome to Total Drama Equestria! In today's episode, well meet our contestants for this season.

*a boot comes up along the shore*

Chris: And here they are now! First up, we have Billie Joe Armstrong!

Bille:*walks off the boat* I Liebe tacos!

Aqua:*walks off the boot and waves to the camera*

Leon:*appears from behind a bunch of smoke from the smoke bomb he threw* The Great and Powerful Leon has arrived!

Christina:*walks off the boat, eating some chips*

Owl:*walks off the boat* H-Hello.

Chef: Good bye. *kicks him the submarine of sorrows*

Cody: *runs to his room and cries a little*

Sorry it was so short. but my internet messed up and it erased everything and I cant remember what I wrote. So I just cut to the point DDDX
More Cards
1234567891011