prom couples... and quinn
all the dresses and the hair. he corsages and suits. it can be a little much. not for these Glee kids. from the Musik to the dresses. here the girls best to worst dressed
-brittany
-quinn
-tina
-santana
-rachel
-lauren
-mercedes
lets start with britt. her dress was a limette, lime green-yellowish dress with a layer of red. it was styled much like tinker bells dress. with little red heels with a bow to finish it. her dress matched artie suit witch i will get to later even though in the begining the of the episode they were broken up. a head band with a blume was all that was needed to finish f the perfect look.
quinn had a Aschenputtel style dress with the same color just sparkly on the top. her hair bunned up like the princess and she was ready to go.
tina in tina fashion her dress was a black long skirted dress. it tied at her neck and was black except for some red lacing up in the front. a lacy head piece and obidient boyfriend was all it took.
santana's body hugging red dress with blume like pattern. it was a daring and beautiful choice.
rachel had a cone like pfirsich dress that looked like an up turned milkshake was still beautiful on her.
laurens lacy topped blue dresss was a beautiful fit on her and flattered all the right places.
mercedes awful color and style choise ruined it all.
now the boys were either good bad oder artie. so lets go in order best to worse.
-mike
-puck
-blaine
-sam
-finn
-kurt
-artie
mikes red and black tux with the red rose. it was out of character yet very sweet of him to match tina making him Von far the best dressed boy.
puck and his white and black outit went well together and was an all around good choice.
blaine and his simple suit were a wowing bit. going nicely with kurts lady ike choice.
sam and his simple suit were a nice break but wasn't as good of a choice for him.
finn and his wierd blue bow tie were al wrong. and didn't really match quinn's dress.
kurt kilt like out fit was good but Mehr for a girls.
artie and his wierd red suit and strange austin powers likeness and elvis hair were a bog no no. yet it some how went good with his presonality and regualar sense of style.
now for the corsages. over a pair of elbow length black gloves tina had a red rse corsage that match the one on mikes tux. mercedes and rachel had ones the Farben of the dresses they sported. quinn had a lovely gardania as suggested Von rachel. santana sported a blood red rose. lauren sported a fierce blue flower. brittany seems to be wearing a red and yellow mix. 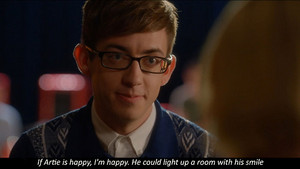 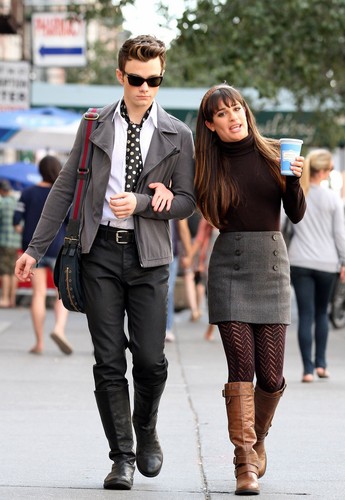 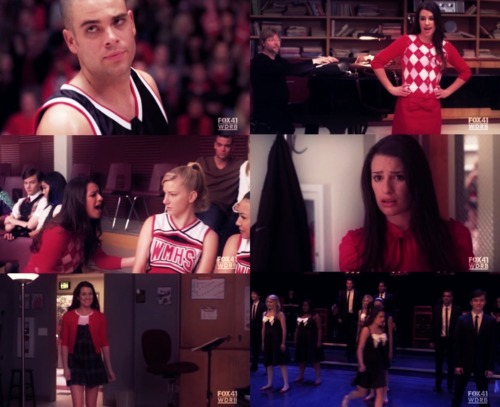